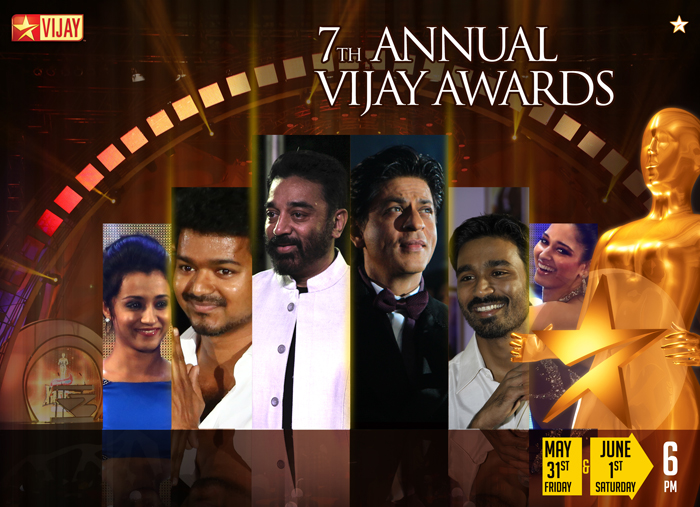 The 7th edition of the Vijay TV Awards takes place on Saturday 11th May at the Jawaharlal Stadium in Chennai. The star studded event celebrates the best of the Tamil film industry and this year, surprisingly the channel has invited Bollywood film star Shahrukh Khan to the event.

It is rumored that he will be honored with the Chevalier Sivaji Ganesan Award, for excellence in Indian Cinema. This is the first time the award will be presented to a Hindi actor. Previous recipients of the award include South Indian stars Rajinikanth, Kamal Haasan & Mani Ratnam.

Shah Rukh Khan is slowly making his way from being a highly internationally recognised Bollywood actor to becoming a celebrated Indian superstar, enjoyed by the diverse Indian community. This will also be a great opportunity to promote his upcoming film Chennai Express which is out in August.

The Award ceremony also has another highly anticipated performance up their sleeves. The Channel tweeted;
“Oooh!!! This is just in: ARR and Yuvan to perform together on stage at Vijay Awards May 11th event.”

AR Rahman & Yuvan Shankar Raja recently worked together on a song for Mariyaan which starrs Dhanush. The song titled “Kadal Raasa Naan” (I am the Sea King) is a Tamil folk song which has been sung by Yuvan with lyrics penned by Dhanush.

The show looks like it will be an unmissable star studded event.