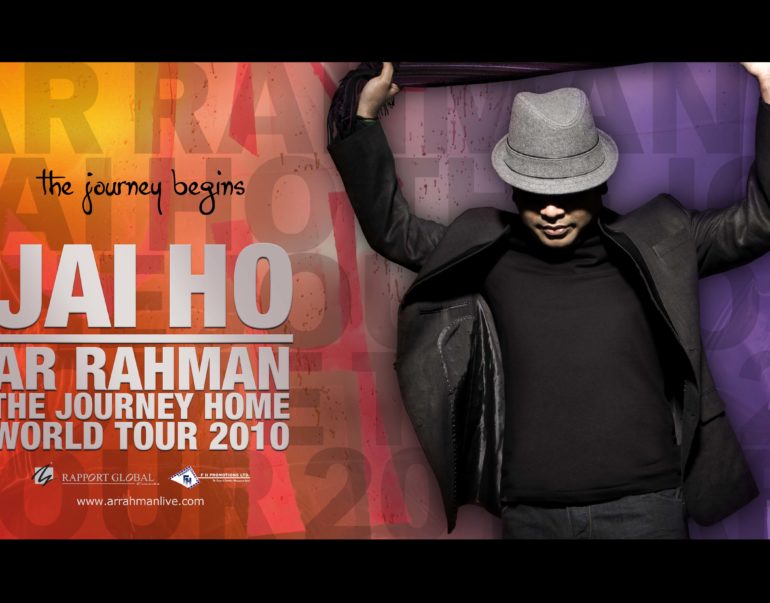 Double Grammy and Oscar winner, AR Rahman, is back on the tour circuit in 2010. The long title of “A.R. Rahman Jai Ho Concert: The Journey Home World Tour” tour, is set to hit over 20 major arenas and cities worldwide.

The North American leg of the tour begins June 11 at the Nassau Veterans Memorial Coliseum in Uniondale, New York, a spectacular venue that AR Rahman has filled out in the past.
Other shows in USA will be at Patriot Center in Fairfax, Va. (June 13), Sears Centre Arena in Hoffman Estates, Ill. (June 18), Air Canada Centre in Toronto (June 20), Oracle Arena in Oakland, Calif. (June 26) and American Airlines Center in Dallas (July 2) and Toyota Center in Houston (July 3 ).

The European leg kicks off on July 10 at Palais Omnisports de Paris-Bercy in Paris and then the tour will hit the UK. The S.E.C.C. in Glasgow (July 23), the Manchester Evening News Arena (July 24) and The world famous O2 in London (July 25). More dates are said to be announced soon.
The tour will feature a unique collaboration, where AR Rahman and creative director Amy Tinkham, who has worked with Britney Spears, the Backstreet Boys and Mariah Carey join hands.

A spokesperson for the tour shares: “A.R. Rahman’s Jai Ho: The Journey Home World Tour will be a theatrical experience that will blend new technologies with powerful dance arrangements and acrobatics,” Tinkham said. “The concert will keep intact the heritage and traditions of India with a new modern presentation. The show will feature changing sets, large images on LED screens and a spectacular cast of musicians and dancers from across the globe.”

In line with previous spectacular shows, this tour looks to be even more thrilling: “Through the vast tapestry of music that is A.R. Rahman, he takes us on a virtual journey through beauty, culture and spirituality. This is uniquely Indian – both ancient and modern.”

Deepak Gattani (Rapport Global Events), who has produced all of AR Rahman’s previously successful tours is back at the helm of this tour and it is said to feature music from all of AR Rahman’s back catalogue, with a few surprises in store, especially some songs that AR Rahman had worked as potential collaborations with the late Michael Jackson.

UK fans can also catch AR Rahman as part of the Alchemy festival at South Bank on 7th April. Although he won’t be performing, he will be hosting and talking about a special selection of his own music that the London Philharmonic Orchestra will be playing. A rare concert not to be missed.
Tickets for the tour will go on sale imminently.