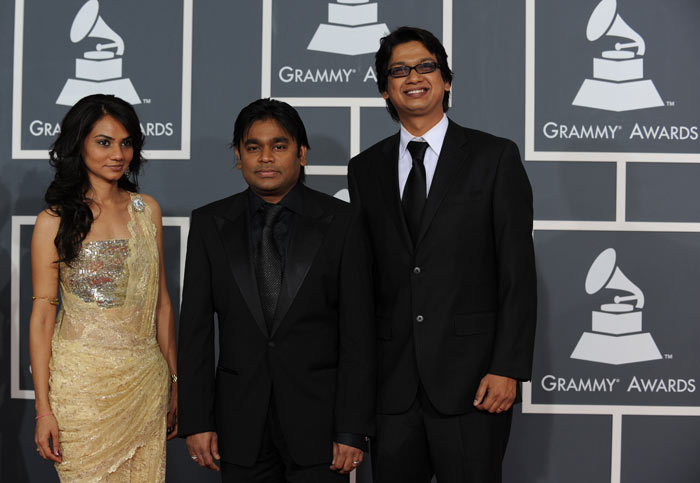 AR Rahman is the delight of India and Tamils all over the world, yet again. He won the first Grammy of the pre-show at the Staples Center for the best compilation soundtrack album (Slumdog millionaire) for a motion picture, television or other Visual Media before his popular track “Jai Ho”, won in the best motion picture song category shortly after. He beat Bruce Springsteen (Wrestler), Quentin Tarantino’s Inglourious Basterds, True Blood and Twilight scores, to the chase. Similar to the Oscars, he won the awards very quickly in succession, with his being the very first Grammy of 2010. 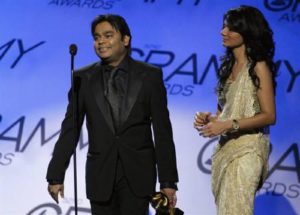 Zakhir Hussain, who AR Rahman toured with as a youngster and had won last year, for “Global Drum Project”, had already predicted AR Rahman’s win and his own loss before the awards: “Even A. R. Rahman has a decent chance. But, I don’t see myself winning. I don’t see me winning because this category has three of the most popular albums in the western classical category and feature three greatest Western classical musicians. We are the outsiders and it will be difficult to breach that aspect. However, it has been an incredible honour just to be nominated” Sarod maestro Ustad Amjad Ali Khan, who was nominated in the best traditional world music album category for his album “Ancient Sounds”, also lost out, to African Kora player Mamadou Diabate’s “Douga Mansa”.

AR Rahman Tweeted his gratitude and speech and also sent it out to his nearly 1/2 Million Facebook fans: “Insane eh ? I never even dreamt about winning all these awards…” As always, his first praise goes to God: “I once again want to thank the Almighty, my spiritual Sufi teachers, Ameen Peerullah Malik Sahib, Danny Boyle, Fox and the whole Slumdog creative team, all the awesome actors in the movie, MIA and Resul Pookutty, my whole team, Gulzarji, Sukvinder Singh, Tanvi Shah and Vijay Prakash.”

He goes on to speak about one of his most cherished confidantes: “My friend and sound engineer the late H Sridhar.” Then he spoke of his team: “Deepak PA, Chetan, Vivianne Chaix, Aditya Modi, Sivakumar, Noell James, Ganesh, Faiz, Anne-Marie, Ranjit Barot and the folks at Nirvana. My agents Sam Schwartz and Amos Newman.” He continues with his long set of Thank You’s: “My friends Karan, Gopal and Vijay, Deepak Gattani, Mohan Chopra, Chris and Simon Long.

He then made thanked his high-profile gurus, starting with Mani Ratnam, whose Roja soundtrack was AR Rahman’s first step out of the world of advertising and into the movie sphere: “My mentor Mani Ratnam, mentors in Mumbai, Shekhar Kapur and Subhash Ghai, and mentor in the West, Andrew Lloyd Webber.” His first love of Chennai is also mentioned: “My extraordinary musicians from Chennai and Mumbai.” Known to be a family man, he goes on: “My mother, My father, my Sisters and my lovely wife and children.” Last but not least: “And all my well wishers from the world who keep me going… Jai Ho India…! A R R.”

Vijay Prakash, the male singer on Jai Ho shares his obvious delight by micro-blogging: Hey folks thank you all for those wishes… it was a great day in my life… thanx to AR Rahman sir… I saw some great artistes perform like Elton John, Lady Gaga, Pink, Beyonce, Celine Dion, Eminem… many more at the  Grammies. I wish every artiste gets to see the Grammies awards live at least once in their lifetime… very inspiring and motivating. Also I don’t know if I can be officially called as a Grammy award winner as it was given for the best song writer… of course all our names were mentioned in this category… And I am proud to say that I am one of the singers of the Grammy award winning song ‘Jai ho’. Love Vijay.”

Tanvi Shah, the female lyricist and singer (she wrote the Spanish words for Jai Ho) shows her elation on Facebook: “AND WE WON BOTH THE GRAMMYS!!!!!!!! Thank you God for everything… Feeling blessed… And thanks to everyone for all the wishes n prayers!!”

AR Rahman also recorded a video message for his over a Billion fans: “Hey guys back in India. Awesome we got two Grammies again. God bless you all for your prayers. Your good wishes and love.” He also shares in his usual humble manner: “Awards are better not expected… It’s a good surprise, actually a great surprise. I just want to carry on doing my work.”