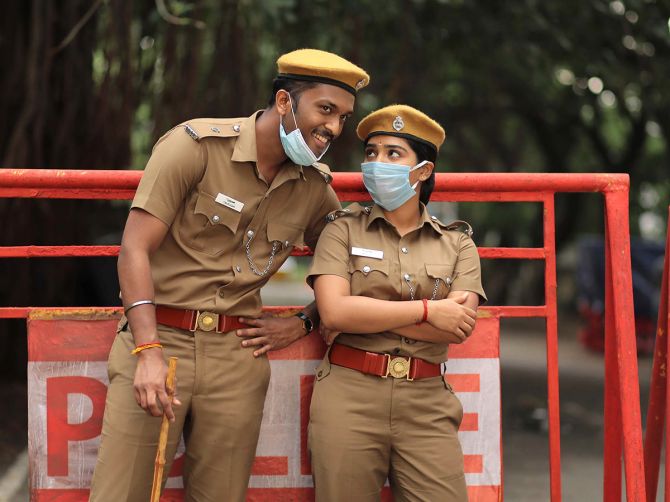 It’s exciting times for British Tamil actor and independent artist Teejay Arunasalam, who is currently in Chennai starring in a string of Kollywood productions.

Following the success of Asuran, a Tamil language film in which he starred alongside Kollywood’s Dhanush, Teejay is back on our screens.

In January, Amazon prime released their second edition of ‘Putham Pudhu Kaalai Vidiyaadhaa’, a series of five films set in the pandemic, starring a string of young Tamil actors including Teejay and Arjun Das.

Teejay plays a Chennai police officer in ‘Mugakavasa Mutham’. The romantic comedy follows the day-to-day routine of three young cops working in the front line, and how a crush on a fellow officer, played by Gouri G Kishan, blossoms. The film is streaming worldwide via Amazon prime.

There’s more! Teejay is currently filming for Pathu Thala, starring alongside Silambarasan TR, Gautham Karthik and Priya Bhavani Shankar. Its also been tipped that he has a role in Mani Ratnam’s magnum opus Ponniyin Selvan.

With all these film projects, Teejay hasn’t forgotten his indie music roots. He is also prepping for the release of ‘Muttu Mut2’, a remake of his popular independent Tamil song ‘Muttu Muttu’, which made him an overnight star amongst the Tamil diaspora. Version two features Malaysia’s iconic rapper Yogi B (@yogibsees) and Indian singer Sivaangi Krish, star of Cooku with Comali. A teaser for the new music video was released at the end of January and has since amassed over 700,000 views!

Not bad going for a Tamil lad from north-west London!