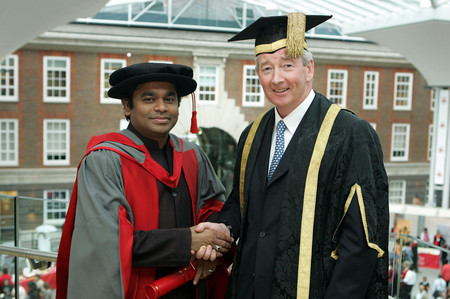 16th December 2009 saw renowned composer Allah Rakha Rahman receiving an Honorary Fellowship of Trinity College London (Hon TCL). The award was presented by Barry Wordsworth as part of the Trinity College of Music graduation ceremony in the Old Royal Naval College Chapel, on the Old Royal Naval College world heritage site in Greenwich – the home of the prestigious Trinity College of Music. On a beautiful and snow-clad day, the campus looked stunning, especially views of the River Thames.

The award was conferred on A.R. Rahman in respect of his distinctive contribution to and creativity in the arts. He was nicknamed the ‘Mozart of Madras’ by Time Magazine and is best known in the UK for the musical Bombay Dreams and the scores for films like Roja, Bombay, Lagaan, Kanatthil Muthamittal, Rang de Basanti, Guru, Elizabeth: The Golden Age, Provoked, Sivaji, Jodhaa Akbar, Ghajini, Couples Retreat and Slumdog Millionaire – for which he received 2 Academy Awards, the BAFTA, the Golden Globe and has been nominated for 2 Grammys in 2010. He also has 3 honorary PhD’s (excluding 2 of which he turned down), 2 from India and 1 from the UK, all conferred in 2009. he was also named Indian of the year by CNN IBN.

Just days after collecting the award, a visibly enthused AR Rahman says he’s come a full circle with Trinity: “You all know that I did my initial grading exams at Trinity at the age of 13 and I had a teacher called Moses in Chennai, who sadly passed away 2 weeks ago. Coming back to Trinity to get this Fellowship award, I’m 43, so that’s 30 years of relationship building with Trinity college. I never knew where it existed, as I did all my classes in Chennai, so coming back here and seeing all these buildings, the Church and everything was fantastic. Such a very inspiring place. It felt really good as I’ve never been to college while here I was wearing this big purple robe, with Fellowships and Doctorates and all.”

Trinity Laban Conservatoire of Music and Dance (which incorporates Trinity College of Music) Chairman Sir Bob Scott, and Joint Principals Derek Aviss and Anthony Bowne spoke at the ceremony, alongside guest of honour Barry Wordsworth. Barry Wordsworth is Music Director of the Royal Ballet Covent Garden and has conducted leading orchestras all over the world. He was made an Honorary Fellow of Trinity College of Music in 2006.