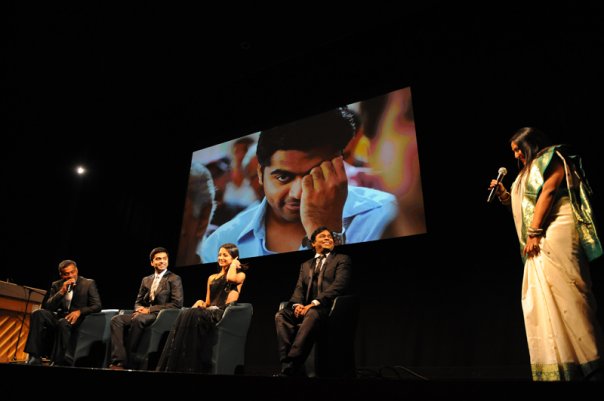 The soundtrack to the forthcoming Tamil film, Vinnaithaandi Varuvaayaa (“Will you come to me, from across the sky?”), was previewed on Saturday evening at a reception at BAFTA in London.
The soundtrack, by Oscar winning composer A.R. Rahman, accompanies the latest film from director Gautham Vasudev Menon. All the artists featured on the soundtrack performed live at the launch and A.R. Rahman went on stage to talk about the film and also to thank his fans.

The top singers of India, including National award winning Naresh Iyer (Roobaroo from Rang de Basanti) performed to a se1ect VIP and press audience who were extatic to have mingles with the actors, Simbu and Trisha and their favourite musicians like Blaaze, the lyricist on Hollywood movies like Slumdog Millionaire and Couples Retreat.

The movie, made in both Tamil and Telugu, is to be released in February 2010 and follows the love story of Karthik and Jessie. Karthik is an ambitious idealist while Jessie is a simple, conservative Malayalee Christian girl. When Karthik and Jessie meet, it’s love at first sight…for Karthik. Jessie holds back, but is unable to resist the persuasive, romantic Karthik. However cultural clashes soon rear their head.
This is the eighth movie from film-maker Gautham Vasudev Menon. Engineer turned director, Menon’s films have, over a short time span, become trend setters in the Tamil film industry-enjoying both commercial success and critical acclaim. He has made stars out of actors including Madhavan (Minnale) and Surya (Kaaka Kaaka). In the recent past, he has made a mark in the film industry with the release of Vaaranam Aayiram starring Surya and Vettaiyadu Villaiyadu starring Kamal Haasan.

Double Oscar winner and recipient of a host of awards, A.R. Rahman is an internationally celebrated composer. Rahman, who made his debut in Mani Rathnam’s Roja, created a new wave of sound and music and since then there has been no looking back. Rahman worked with Andrew Lloyd Webber on Bombay Dreams and has composed for the ‘Lord of the Rings’ musical. In 2006, he received an honorary award from Stanford University for contributions to global music.

In 2009, Rahman won his Oscars for ‘Slumdog Millionaire’ that he was catapulted into the global spotlight. He recently performed at the Obama luncheon at Washington and has been nominated for a Grammy this year and also collected his honorary fellowship from Trinity college of music, his old musical alma mater. 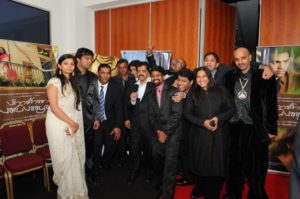 Thamarai team with AR Rahman’s singers after their performance

This is the first Tamil soundtrack that AR Rahman has worked on since winning the Oscars. Speaking at the launch, AR Rahman said: “Winning the Oscars was great and it does make you mindful of a global cross-over audience, but every film I work on is precious to me. The music is key for this film; Vinnaithaandi Varuvaayaa is a story of two different cultures, and all the emotion of that comes through the music. It’s the first time that Gautham and I have worked together and because it’s a new combination, there has been a lot of curiosity and anticipation about the soundtrack.”

Talking about the topic of the film at the launch, Gautham Menon said: “In the movie, Karthik is a script writer whose friend tells him not to write a script about a romantic cultural clash because it would be too cliched; by poking fun at the genre we work around the cliches of a love story. Working with A.R. Rahman has been inspirational; we’re very pleased with the end result and there is huge excitement about the soundtrack.”

The seven-song soundtrack features lyrics in Tamil, Malayalam (a language predominantly spoken in Kerala in south India) and English. Full details of each track are below. The soundtrack will be released globally through Sony BMG in January 2010.