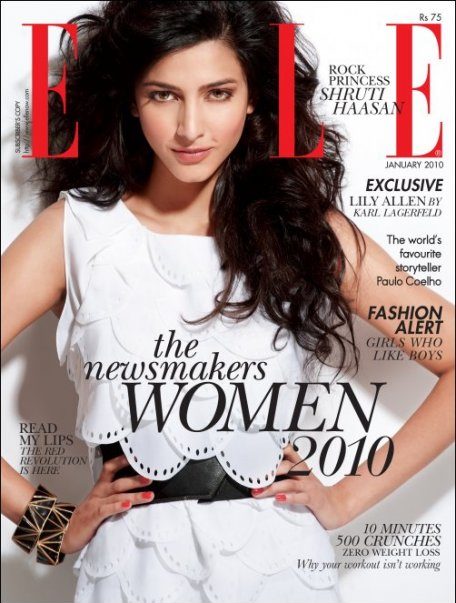 Shruti Haasan on the cover of Elle Magazine

Most recently seen in the promotional music video of her Dad’s film Unnaipol Oruvan, the gorgeous Shruti Haasan, who holidayed in the US over winter, managed to fit in the Elle magazine cover, while also juggling her role in a Telugu fantasy movie Yodha, with the gorgeous Siddharth Narayan (who was in Shankar’s Boyz and Rang de Basanti).

Updated January 2010 with video and photo

The daughter of actor Kamal Haasan and actress Sarika, Shruti blends the best of South and North India, in her looks and her immense talent, a pool she imbibes from her entire family. From singing and songwriting to acting and music composing, she is one talented young lady, and that’s not taking into account her immensely good looks and dance skills.

In terms of doing music for the silverscreen, she tells Elle: “After doing the music for a film, it kind of changes your perspective on your own music… I’ve found a new phase in my life, I’ve found a new sound, and now I’m setting up a new band.”

Her take on music is indeed very deep and she says: “I would’ve liked to have jammed with John Lennon, but he’s dead now. I am blessed to be born in this era with the changes that have taken place here. It’s only going to get better.”

Even though her first film in Bollywood, Luck, didn’t fare very well in the box office, her performance gained accolades and she speaks of her future in the North: “It’s really about doing something that makes sense to me and focusing on that. I’m exited to see what Bollywood comes up with, for me.”
The Thamarai team wish her an amazing 2010, with this glowing start, gracing the pages of Elle India in an exclusive photo shoot and interview.