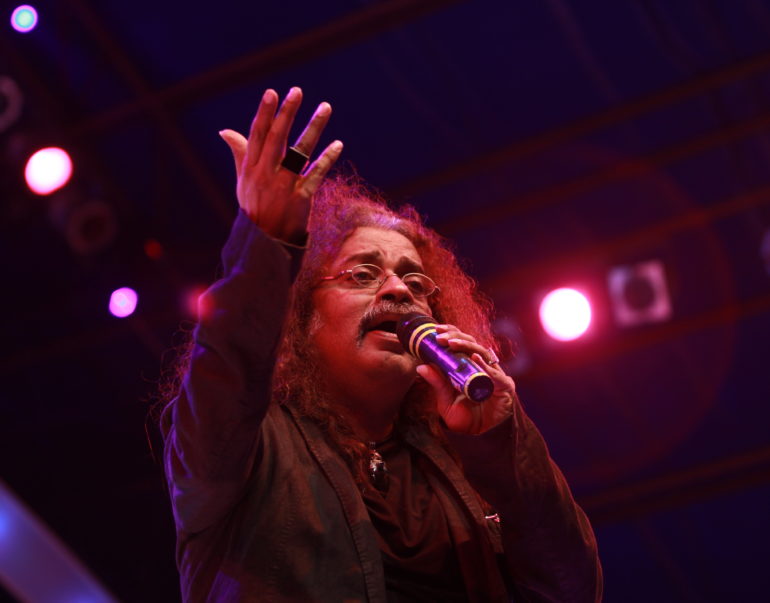 “Nenjukkul Peidhidum Maamazhai, Neerukkul Moozhgidum Thamarai” – such an apt opening for our very own Thamarai team, who, along with thousands of others, spent an evening listening to the stunning vocals of esteemed playback artist Hariharan and his troupe on April 11th  2010.

Held within the prestigious Royal Albert Hall, “Isai Thendral” was a three-hour long musical journey, in which Hariharan performed a mix of his best-loved Tamil songs from the past two decades. Hosted by the truly charming and beautiful actress Khushboo, the show also involved a 10-piece band, 2 male backing singers, 2 of his female students (Lavanya and Chandrayee), his talented son Akshay, and well-known playback singer Sadhana Sargam.

Hariharan definitely instigated feelings of nostalgia to all those in the audience, taking us all back to the nineties and early noughties with songs such as “Patchai Nirame” from 2000 hit “Alaipayuthey”, and “Thamizha Thamizha” from “Roja”.

His students – Lavanya and Chandrayee – were both very talented singers, and it was clear that they were both humbled and ecstatic at being able to perform with their Guru on stage. Chandrayee – a Bengali girl with impeccable Tamil pronunciation – sang several songs with Hariharan including “Mudhal Mazhai” and “Iyengaru Veetu Azhage” which are both from Vikram films (“Bheema” and “Anniyan” respectively). Lavanya had a stunning voice, and sang “Mudhalvan” classic “Kurukku Siruthavale” with Hariharan, as well as the upbeat “Ottaiyanam” from “Arul”.

Hariharan’s son, Akshay – a London School of Economics graduate – then joined his father on stage, and together they sang the version of “Krishna Nee Begane” featured on the album “Colonial Cousins” (Hariharan and Leslie Lewis, 1996).

The musicians accompanying Hariharan were all highly talented, and the tabla player and drummer in particular stood out – their solo during “Krishna Nee Begane” resembled a sort of Thani Avarthanam (Aalap) between the two in Yaman Kalyani, and was both energetic and flawless.

Although Hariharan mainly sang his older songs, he also interspersed these with his newer tracks such as “Omaha Zeeya” from the 2010 Tamil spoof entitled “Tamil Padam” (which he performed with Chandrayee), and songs from his latest collaboration with Leslie Lewis; “Modhi Vilayaadu”. Hariharan performed the title track “Modhi Vilayaadu”, and his students – Lavanya and Chandrayee – sang the lovely “Paathi Kadhal Paathi Mutham”.

Hariharan recently won the National Film Award for Best Male Playback Singer for his song “Jiv Rangla” from Marathi movie “Jogwa – The Awakening”, and Khushboo kindly persuaded him to treat the audience to a few lines of this. A few members of the audience were keen to hear him perform a Hindi piece, so he indulged us in a few lines of a Ghazal-style song – a teaser for his Ghazal concert on April 12th perhaps. Even though he only sang a few lines of this Hindi piece, it was clear that his ability to improvise is unrivalled, and is mesmerising for the listener.

Sadhana Sargam joined Hariharan on stage to perform duets including the ever-popular “Vennilave Vennilave” from “Minsara Kanavu”, amongst others. Their duet for the song “Udhaya Udhaya” was superb, and the improvised swarams they threw into this piece were absolutely breathtaking.
Sadhana herself sang her Tamil classics such as the melodious “Konjum Mainaakale” from “Kandukondain Kandukondain”, “Chanakya Chanakya” from “Dum”, the devotional “Mukundha Mukundha” from Kamal Haasan’s “Dasavatharam”. Particularly enthralling was her performance of “Snehithane” from “Alaipayuthey”.

Host Khushboo was a real delight to watch on stage, not only was she a cheerful presence whilst hosting and interviewing the artists, but she was also uninhibited enough to come on to the stage during the vocal performances and dance with the artists; watching her have so much fun on stage raised the spirits of those of us in the audience even more!

Hariharan continued his wonderful performance with the stunning “Uyire Uyire” from the film “Bombay”, and by embellishing it with his own improvisations, he augmented this already beautiful melody to a whole new level. He concluded the evening with evocative vocals for the song “Thamizha Thamizha” from “Roja”, though due to time constraints, he sadly wasn’t able to sing the full song.
Overall, “Isai Thendral” was an incredible and spellbinding evening that left the audience desperate for more. A huge thank you should go to Bina & Prakash Mistry, and the rest of the Firefox Productions team for organising this concert, and of course to Hariharan, Sadhana and the rest of the performers for a truly wonderful evening of incredible music.