The American musician Shanker Tucker has released the teaser to his latest project. He has been commissioned to produce the music for his first movie ‘Orey Nyabagam,’ a Tamil language film from Chennai. Thamarai & Karky have penned the lyrics. This is the maiden production of O2 pictures in association with Harmon movie makers, who have successfully sold the music rights to India’s Think Music. The trailer has been filmed beautifully and features the young American sing in Tamil! 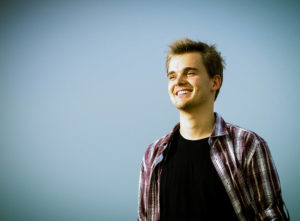 Shankar Tucker, a clarinet player, encapsulates the essence of Indian classical music, fused with hints of Western Jazz & pop. A sensation on the internet, Shankar has 17.5 million views on Youtube for songs he has composed featuring talented independent Indian singers from across the globe. Through his videos he has successfully introduced fresh young talent into the Indian film music industry. We wish Shankar the very best on his new project and look forward to his new album. For more on Shankar, view the video below.