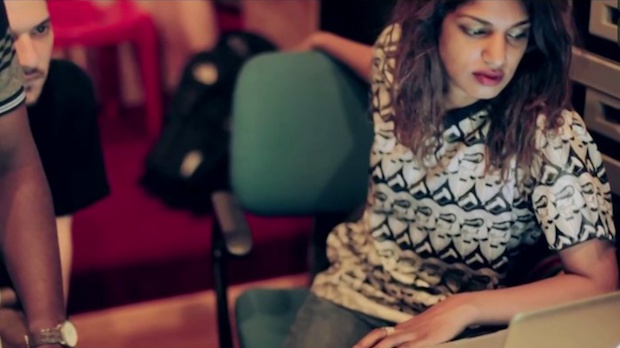 In 2009 Time magazine named Maya Arulpragasam aka ‘MIA’ as one of the 100 most influential people on the planet. The British Tamil rapper, known for her provocative nature has reached unprecedented heights for a South Asian artiste in the western music scene. Her fascinating journey through life and her music career is being made into a documentary to accompany the release of her fourth studio album, Matangi.

The teaser for the documentary was leaked a few days ago and has caused a sensation. It features Kayne west, ex-boyfriend producer Diplo and her father, who is introduced in the video as one of the five founders of the ‘Tamil Tigers’ aka LTTE – Liberation Tigers of Tamil Eelam.

There have been attempts to remove the video from the internet by her management, Jay Z’s Roc Nation. Rumoured to have been leaked by the film’s director, Steve Loveridge who quit the project because of the delays and budget cuts.

M.I.A frustrated by her label’s dwindling support for the project got to twitter to request support from her fans to finish the film;

M.I.A  – im gonna need @kickstarter and my fans to help make this exsist , ive been black listed through normal channels !!!!!!!

Fans have been uploading the video onto various platform. It can be viewed here for the moment.