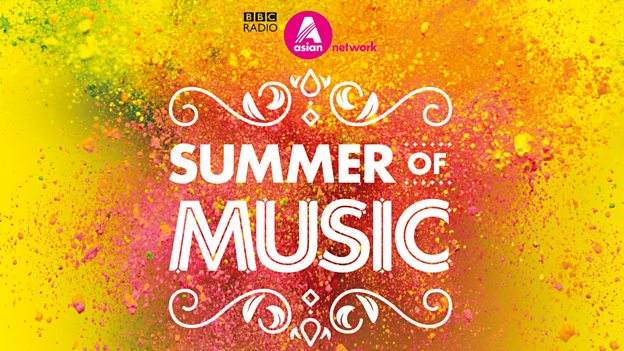 Are you ready for a ‘Summer of Music’ with the BBC Asian Network?

This summer, the BBC Asian Network is bringing the biggest, best and newest Asian music around to audiences across the UK. From huge stars to live broadcasts from some of the biggest events in the calendar, the Asian Network will be at the heart of the action.

Mark Strippel, Head of Programmes for the Asian Network, says: “BBC Asian Network is a leading platform for championing new British-Asian and global South-Asian music. Our events this summer, from our New Music Day at Maida Vale to London Mela and the Proms live from the Royal Albert Hall, demonstrate the unparalleled range, depth and quality of our output. The station is a central part of the BBC music portfolio and our position is stronger and clearer than ever. We have some amazing content to deliver to our audience this year.”

The jam-packed calendar of events kicked off today, 3 July, at the Asian Network New Music Day. One of the first events of its kind to showcase new British Asian talent, the day featured performances by artists who have already made it onto the British Asian music scene, in front of listeners at the BBC’s legendary Maida Vale studios. Acts including rapper Riz MC, acclaimed producer Naughty Boy and Bhangra star Jaz Dhami wowed the audience, with performances also by Abi Sampa from The Voice, Sonna Rele, The Elements, Cynikal, Steel Banglez, Lost Souljah, Jaykae, Driving Lolita, Lippi, Swaati and more.

On Saturday 6 July, the Asian Network will be recording a rare performance by one of Pakistan’s legendary female Sufi singers – Abida Parveen. With her classical training in Sufi Kalaam and one of the most unique voices of the last 30 years, Abida rarely performs outside her native Pakistan. Sometimes known as the female equivalent to Nusrat, she performs ghazals, qawallis and sufi kalaams in an intimate Manchester setting. The performance will be broadcast at a later date this summer.

Also on Saturday 6 July, the first Mela of the season kicks off at Platt Fields Park in Manchester. One of the biggest outdoor events in the North West, attracting nearly 100,000 people from across the area, the day will be full of activities and stalls for all the family to enjoy. Artists on the line-up include Jaz Dhami, Saini Surinder, Zeus, Bilal Saeed, Nafees, Sama Blake, Bonafide. These performances will be filmed for bbc.co.uk/asiannetwork and recorded tracks played across the network from Sunday 7 July.

As part of the BBC Prom season, on Monday 12 August Asian Network and BBC Radio 3 will come together to simulcast the world premiere of Nishat Khan’s BBC commission The Gate Of The Moon (Sitar Concerto No. 1), performed by the composer himself, and Holst’s Indra, a musical portrayal of the Hindu god of rain and storm. David Atherton conducts the BBC National Orchestra of Wales in this performance.

Later in the month, on Monday 26 August, the Asian Network will be dedicating an entire day to broadcasting of some of the best live music performances that have been recorded exclusively for the network. And from the Alchemy Festival in London, the station will be broadcasting a special performance by Pakistan artists Zeb and Haniya, and a ‘Bollywood to Hollywood’ concert where the BBC Concert Orchestra, alongside UK music producer Kuljit Bhamra and conductor Robert Ziegler, work some of Bollywood’s most classic tracks. These will be performed by some classic UK Asian vocalists, including Mangal Singh, Johal Premi, Kumar/Dhami from Heera & Sangeeta, as well as Shahid Khan, Rekha Sawhney and Jonathan Mayer on sitar.

And rounding off the busy summer schedule, Asian Network will be broadcasting live from the London Mela – one of the biggest Asian outdoor music events, with over 150,000 people descending on Gunnersbury Park on 1 September. This is one of the biggest melas in Europe, and the Asian Network will bring listeners the live mela experience. Asian Network presenters will be both hosting the main stage and broadcasting live from the event. Nihal will be hosting the Mix Tent, where some of the rising stars of British Asian Urban talent will perform alongside Asian Network DJs KanDman and DJ Limelight.