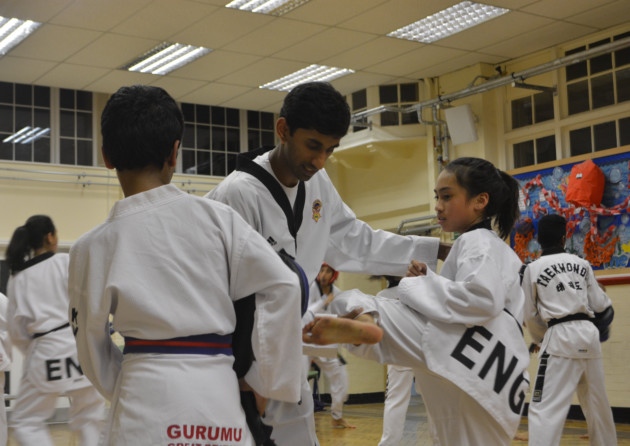 Two Tamils, one who is under the age of 10 and has shown ability, willingness to learn and promise for the future in his chosen sport and his dedicated coach have come out winners. Indeed a great feat, shown by young Viroshan Gnanapandithan and his mentor, Gurumu Taekwondo specialist and IT consultant, Sivakumar Renganathan.

Says Sivakumar Renganathan: “I am very happy and honoured to have won the Coach of the Year Award at the British Asian Sports Awards last night. My student Viroshan just aged 10 also won the Young Sports Personality of the Year Award. I would like to take this opportunity to thank you all for supporting our nomination. With our efforts and hard work in Taekwondo and your support and best wishes we won both the Coach of the Year and Young Sports Person of the Year Award on Saturday 6th February. A very big thanks goes to Jayanthi, Sajidah and Rita for really driving the Gurumu BASA campaign forward and being proactive to promote both Viroshan and I and Gurumu Taekwondo. I also want to thank my instructors Dr Krishna Rao Gurunaidu, Prakash Gurunaidu and Dr Samy Gurunaidu for teaching me this art of Taekwondo to the best of their ability and ensuring that my skills in Taekwondo are at the highest level possible.”

The winners of the prestigious Change4Life British Asian Sports awards were revealed at a star-studded ceremony at the Grosvenor House hotel in Park Lane on Saturday 6th February. Hosted by ‘Eastender’ Nitin Ganatra and ‘Strictly Come Dancing’ star Laila Rouass, the awards show once again recognised the contributions and achievements of the best in British Asian Sporting talent. Tamil tennis legend, Vijay Amritraj flew down from his Californian abode for the event. He is well known also for his Hollywood career, having acted in the James Bond film Octopussy, Star Trek IV: The Voyage Home amongst other roles in TV and is married to wife Shyamala, who is Sri Lankan Tamil. His son Prakash Amritraj is a tennis player (as is his nephew Stephen), while his other son Vikram, is a rapper.

BASA awards ambassador Amir Khan was honoured with the Here & Now Champagne Moment of the Year award. He said: “Every time I win an award, I get the same feeling as when I first won one. It feels great to win the Champagne Moment of the year. Last year I became world champion so it was a really good year for me. There were some really strong contenders at the awards and I have respect for all the nominees.”

England women’s cricketer, Isa Guha was also celebrating after winning the Change4Life Sports Personality of the year award. She was recognised for becoming an established England International cricketer and playing an integral role as a member of the World Cup Winning team last year.
She said: “Today’s ceremony was amazing! There were so many strong contenders up for this award and so I am truly humbled to have received it. I would like to thank the Change4Life British Asian Sports Awards for giving myself and others a platform to showcase our talent. It’s been a great year for women in sport and I hope that this award can inspire more women to get actively involved in sports.”
This year’s awards were partnered for the first time with Change4Life, the groundbreaking movement which supports families to ‘eat well, move more and live longer. The British Asian Sports Awards partnership with Change4Life aims to increase awareness of the importance of eating well and moving more amongst the South Asian community, where some obesity related illnesses, such as type 2 Diabetes, are higher than the national average.

Other winners on the night also include Amit Bhatia, the Vice-Chairman of QPR who was crowned winner of the Emerald Knight Community Business in Sport award.

The charity auction on the night raised thousands of pounds for The British Asian Trust. The event will be broadcast globally on Sony Entertainment Television Asia in April 2010

The winners this year included

Cobra Beer Most Up and Coming Sports Personality of the Year
Raj Hundal, Middlesex, Professional Pool

Change4Life
Change4Life is an ambitious new movement that will help mums, dads and families eat well, move more and live longer and was launched on 3 January 2009. The aim of the campaign is to halt the rising tide of obesity. Under the banner of Change4Life, the Government is galvanising support from everyone in the country from grass roots organisations to leading supermarkets and charities.

If current trends continue, by 2050 only one in ten of the adult population will be a healthy weight and the cost to the NHS and society could reach £50 billion.

Sporting Equals
Sporting Equals exists to promote ethnic diversity across sport and physical activity, and is the only organisation in the UK to do so. Set up in 1998 by Sport England, in partnership with the Commission for Racial Equality, but now an independent body, it aims to inform, influence and inspire in order to create an environment in which BME communities can influence and participate in all aspects of sport and physical activity.

The Thamarai team wish all the sports people all the very best for the future. Photos courtesy: Raj Ghai/Media Moguls