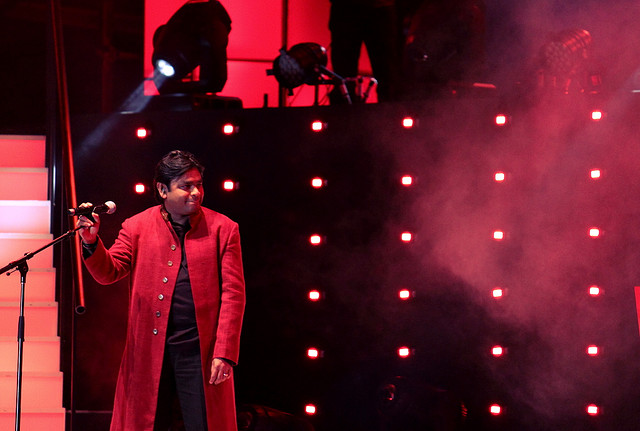 They saw rain and they saw sunshine, they saw colour and spectacle – the dancers shimmied, the singers sang their hearts out and all in all, Australia ‘rocked’ to the vibe of double Oscar winner, AR Rahman and his crew of 40 people from India. A huge success, in the words of AR Rahman:  “The concert is a gesture of friendship and goodwill between the two countries (India and Australia). I hope this solidarity continues to grow and blossom through the coming years.”

I was there at the 2005 show and AR Rahman looked much more relaxed than the last time I saw him performing. In terms of individual performances – I thought Hariharan sang well generally and his rendition of Nahin samne from Taal was brilliant. Also, his acoustic set with Sadhna Sargam, of Udaya Udaya was equally good. The intro song aside, AR Rahman started with Athiradee from Sivaji and crowd (“Tamil crowd”) erupted like crazy.

ARR sang a number of Tamil songs this time, which pleased the audiences a lot. Mustapha, Humma and Veerapandi Kotayile (nearly imitating Mano) made for awesome viewing. He really was more relaxed and free than 2005 and we all caught the vibes.

My personal pick of the night was Khwaja mere Khwaja from Jodha Akbar, AR Rahman on Harmonium, accompanied by Javed Ali and Aslam, was brilliant, soulfully brilliant. They continued with Maula (Arziyaan) from Delhi 6 and I really likeed Javed Ali’s voice, as he seemed like he had a great attitude towards music.

Sivamani, on the drums, didn’t have a solo this time but his presence was felt throughout the show. Asad Khan (who played Mausam and Escape on the sitar, from Slumdog millionaire) was absolutely brilliant. He made such complex patterns and speed of playing seem so effortless. The keyboardist Stephen Devassy was good, and had a solo as well, but I guess choice of instruments on the keyboard assisted his performance, in my opinion.

Rapper Blaaze was himself as always, and another stand out was Lady Lush, from London. She is undoubtedly the next Missy Elliot. She was brave, performed her heart out and was excellent live. Her performance of Konjum Nilavu, with Shweta Pandit was full of energy. Her rendition of the Hindi Pudhu vellai mazhai from Roja was very sweet. Benny Dayal sang, but didn’t get a solo, I would have liked to see more of him. I think Benny has been inspiring AR Rahman’s choice of clothes on stage! There was rain, but crowd stayed on and enjoyed. Only one Bhangra song, Rang de Basanti  was performed and the Punjabi women sitting next to us hoping for more seemed a bit disappointed. Perhaps they could have done a number from Blue to cater for that side.

Some of the singers struggled a bit at times with high pitch. I guess at a stage show, it’s expected, especially with so many screaming fans and also it is tough to get the feedback monitors right at these events. Of course all my musician friends picked up on this, but not the rest of the crowd. People came to see AR Rahman, and they got enough of him, as he sang and spoke much more than expected.
Some Australian columnists wrote more about the symbolic gesture of the concert than the music and made it seem trifling, which I thought was biased and bit disappointing. I guess it’s expected with Western music reviewers, who don’t have full appreciation of Indian music and it’s intricate nuances.

I was personally expecting Vellai pookal and Unthan desathin kural (Situational songs which would have suited the mood and cause of the show), but not all songs could have been accommodated in the time slot of the show.

The show ended with Jai Ho as the penultimate number, the most popular song at the moment and most known by all the crowds and Tanvi Shah, one of the original singers, sang with many others and AR Rahman of course – this got a huge ovation, as expected. The end was quite spectacular, with Vande Mataram and all the singers took part with gusto, especially ladies like Neeti Mohan and AR Rahman’s sisters. The Gandhi, Mother Teresa and Martin Luther King quotes were nice to see and the fireworks at the end finished it all off beautifully. Overall, it was a very good show and worth attending. Everyone enjoyed it tremendously and we hope for more such shows in Australia.