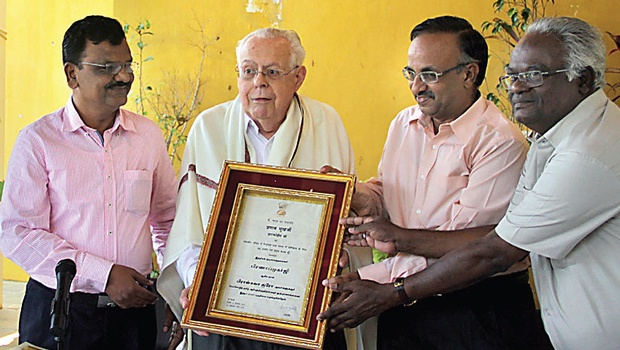 President of India Pranab Mukherjee handed out the Presidential Awards for Classical Tamil earlier today. Among the recipients was C. Govindarajanar, a 92-year-old archaeologist who received the Tolkappiyar Award for outstanding contribution to Tamil studies. His work includes working for 17 years in the region from Pumpukar to Vanci, leading to the identification of the Kannaki Temple in Tamil Nadu.

A French national, Francois Gros, received the Kural Pitam Award for his work in translating a number of Tamil classicals into French. Gros was also the vice-president of the International Assocation of Tamil Research.

The Ministry of Human Resource Development hold the Presidential Awards for Classical Tamil in order to honour eminent scholars, and recipients are awarded with a certificate of honour, a memento and a cash prize. President Pranab Mukherjee handed over the awards at the ceremony which took place at Rashtrapati Bhavan (the Presidential house) in New Delhi.