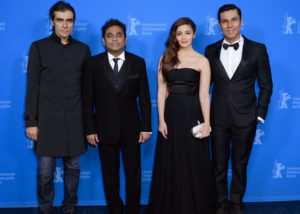 The world premiere took place on Thursday 13th February at the 64th Berlin Film Festival, one of the world’s biggest film festivals. The film will be released worldwide on the 21st February.

The soundtrack produced by Chennai raised AR Rahman was released a few weeks ago and today at a Press conference in London, journalists were screened the music video for Patakha Guddi.

The video features clips from the movie with brand new scenes of AR Rahman singing in the back of lorry, taking in the rural settings of Northern India.

It will be interesting to see if the same video is featured in the film or if this will just be used for youtube & music television channels.