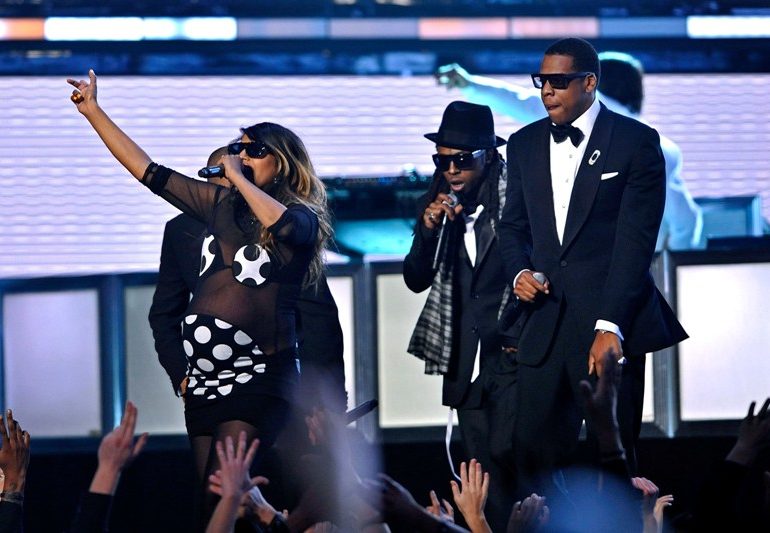 It’s been a momentous year for Tamil MC, Mathangi ‘Maya’ Arulpragasam aka M.I.A – she performed at the Grammy’s, had a baby and was nominated for the Oscars. The daughter of seamstress Kala (also the name of her 2nd album) and an intellectual revolutionary, Arular (also the name of her debut album), M.I.A has a long history of artistic ability and innovation and her outspoken care for 3rd world issues and humanitarian work speaks for itself. She professed to taking an early retirement at the Bonaroo festival in 2008, yet while heavily pregnant, she performed at Grammy’s, showing that there was no stopping her.
She also has a new album in the pipeline, alongside a possible part in an AR Rahman album. Her long-time collaborator and ex boyfriend, super-producer Diplo revealed to Pedestrian TV: “I’ve been in the studio with MIA working on her new record, it’s like Gucci Mane meets Animal Collective. I think there are a couple of people producing on it, but we’re going to finish it off, me and Switch. We’ve done like four tracks already.”

After the immense success of Kala in 2007 and M.I.A taking the USA by storm, her next album is hugely anticipated. Her usage of Chennai’s street beats of Dappankutthu and Gaana, alongside the sounds of the Nadhaswaram, a Tamil instrument and also samples of Ilayaraja and Harris Jeyaraj compositions make her music extremely interesting to listen to. Whether it is Timbaland, Missy Elliot or AR Rahman, M.I.A has a fresh vibe with her enthralling and unique music.

We round-up M.I.A’s eventful 2008/09
October 2008 – The already pregnant M.I.A was in the iTunes chart Top 10 with Paper Planes, from her 2nd album, Kala and she revealed that she had recorded a cover of Tom Waits’ Way Down In The Hole, which is the main theme of the US TV show, The Wire. The Wire is set in Baltimore (a favourite place of M.I.A) and was a cult show of sorts (it was cancelled in 2008), covering a realistic portrayal of urban life and socio-political themes. A release date for the track is still expected.

November 2008 – M.I.A and AR Rahman team up for the mega-popular track, Oh Saya for Danny Boyle’s Oscar winning film, Slumdog Millionaire. M.I.A had used the services of AR Rahman’s state of the art AM Studio in Kodambakkam, Chennai when recording Kala and when Danny Boyle had suggested her to AR Rahman, they did a remote collaboration, where she supplied the rap from the US and AR Rahman recorded in London and Chennai. Her hit track ‘Paper Planes’, which climbed the charts when used in the trailer of stoner movie Pineapple Express, was also aptly picturised by Danny Boyle in Slumdog Millionaire.

December 2008 – Rock musician, Benjamin Zachary Bronfman (son of African-American actress Sherry Brewer, and Warner music group CEO Edgar Bronfman, Jr.) and M.I.A got engaged and she revealed news of her baby who was due to arrive on Grammy night. She also released her ‘Extended Merch’ fashion range of T-shirts, bodysuits and leggings, inspired by her colourful, somewhat psychedelic album covers.

January 2009 – M.I.A was nominated for the Brit Award for British female solo artist, but the prize went to UK singer, Duffy.

February 2009 – M.I.A performed ‘Swagga like us’ at the Grammy awards with Hip Hop’s finest rappers, Jay Z, Kanye West, Lil Wayne and T.I. Heavily pregnant, she looked super stylish in a Black and White Polka dot dress and showed no signs of giving birth – until just after the show, when she was rushed to hospital! She gave birth and was immensely proud of the baby boy whose name she refused to reveal. She also considered performing at the Oscars soon after, with AR Rahman (who went on to win 2 in succession), but she decided to spend it at home in NYC, with her beautiful baby instead.

March 2009 – The baby’s name causes a lot of controversy, as the curiosity of the media rises. The name Ickitt was thrown around on many quarters. In the meantime, she was added to the line-up of the Coachella festival in California, alongside the likes of Paul McCartney, The Cure and Morrissey. She performed a somewhat bizarre set, with her protégé, Rye Rye (who is signed to her N.E.E.T. label alongside African Boy) and her loyal fans were happy with her unique form of musical chaos. TMZ, the website which broke the news of Michael Jackson’s death did some digging and found out her baby’s name as being Ikhyd Edgar Arular Bronfman. Her father’s name as the Tamil contingent and the meaning of Ikhyd is not known. Edgar Bronfman comes from her fiancé’s illustrious father. The birth certificate found also revealed that M.I.A’s real birth date is July 18, 1975 as opposed to the 1977 date first released.

April 2009 – 2 Tamils, M.I.A and AR Rahman are named in TIME magazine’s 100 most influential people in the world. Spike Jonze, the well known film maker, wrote her TIME magazine piece and reminded us of how Jude Law was one of the early buyers of her paintings, back in 2001. Attending the TIME event meant that she shared space with the likes of Michelle Obama and Oprah Winfrey. M.I.A used the event to spread word about her humanitarian concern for the Tamils.

August 2009 – M.I.A performed a new song called Born Free, thrilling the audiences at Street Scene. Christina Aguilera speaks of working with M.I.A and Santigold (who was M.I.A’s opening act in her last tour), in her upcoming album Light and darkness.

October 2009 – M.I.A won 2 awards at the PRS Performing Right Society) awards, for Paper Planes and Swagga like us, alongside the likes of Paul McCartney, Bono and Mick Jagger for tracks that got the most airplay in 2008.

November 2009 – Diplo, who worked on M.I.A’s first album, Arular, speaks of his collaboration with her for her next untitled album (KaliMayaSugu or KaMaSu, named after her and her siblings perhaps?). Her label, N.E.E.T is a subsidiary of Interscope Records and her next album is said to include her tour mate, DJ Egyptian Lover. A trim and fit looking M.I.A also joins Paris Hilton, Cat Deeley, Hayden Panettiere et al, at the LA launch of Jimmy Choo’s new collection for H&M.

M.I.A Tweets “I .T .E .E FOR N.E.E.T >>>>>>>>>>>>2010” – Indicating that her label will come into full force 5 years after the phenomenon that is M.I.A started, in 2005, with Arular. She’s come a long way from her Internet file sharing days of Galang and Sunshowers, which featured cinematography by Rajesh Touchriver. The Thamarai team wish her all the best for the next 5 years and more.

TAG :BRITISH TAMILTAMILTAMILSTAMILS IN THE MAINSTREAM