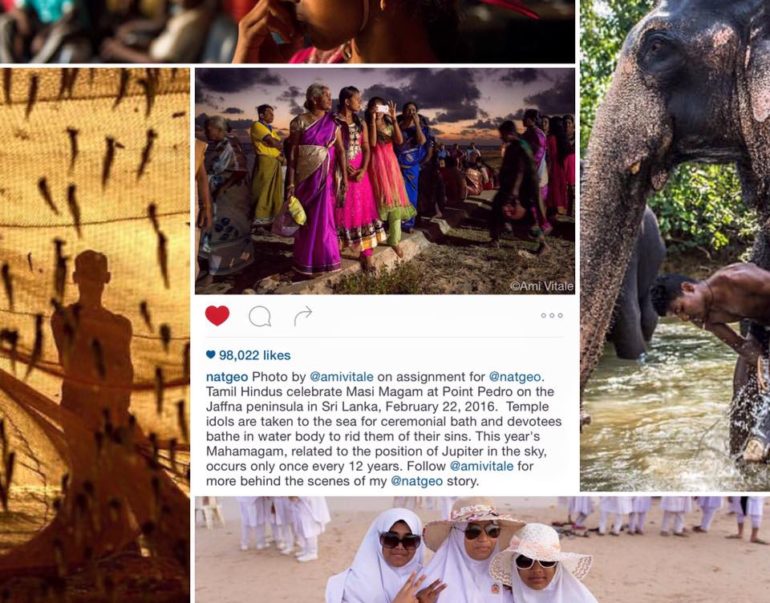 For an upcoming feature on Nat Geo, American photographer Ami Vitale visited Sri Lanka. Here are a few behind the scenes images from her recent assignment which focuses heavily on the Tamil north and east of the island.

The centre image was captured at the Tamil Hindu festival of Masi Magan in Point Pedro, Jaffna Peninsula on the 22nd February. The festival occurs on the ‪#‎Tamil‬ month of Masi (February – March) under the Magam star and observed for several centuries. Temple idols are taken to the sea for ceremonial bath and devotees bathe in water body to rid them of their sins. This year’s Mahamagan, related to the position of Jupiter in the sky, occurs only once every 12 years.

Other favourites include (left) fishing in Jaffna, (bottom right) Muslim students from Kandy visiting Koneswaram Kovil in Trincomalee which has been a hindu pilgrimage site since 400 BCE and (top left) a photo from the recent St Anthony’s church festival on Kachchativu Island. Attended by thousands of Roman Catholic pilgrims from southern India and northern Sri Lanka who converge on the small island by boat to celebrate the shrines annual feast of St Anthony, the patron saint of fishermen. The festival was suspending during most of three decade long conflict.