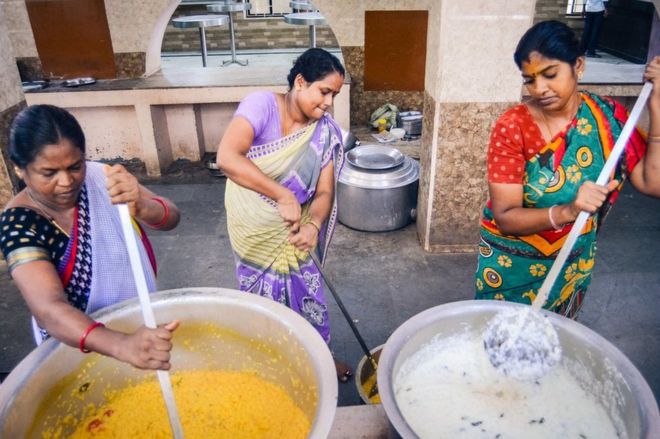 The Tamil Nadu Chief Minister J Jayalalithaa’s “amma canteens”, which serve cheap meals to hundreds of thousands of people daily, have become immensely popular with the poor and the middle classes. The BBC’s Geeta Pandey samples the treats at a canteen in Chennai (Madras).

It’s just a few minutes after noon on a hot summer day as I join the queue of lunch-goers at the amma canteen in Pallavaram town, just outside the state capital, Chennai.

The menu today includes hot sambhar rice (rice cooked with lentils and spices) and curd rice (rice cooked in yogurt with curry leaves). The former is selling for five rupees (seven cents; five pence) a plate while the latter costs just three rupees – a fraction of what the dishes would cost in any other restaurant.

I’m famished so I buy a plate of each and move to one of the tables in the centre of the room to eat. 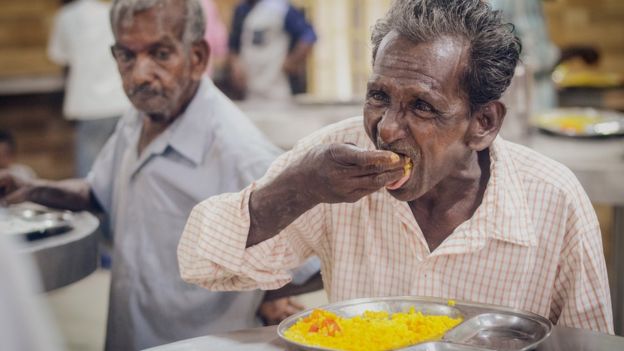 If you’re after a fine dining experience, this place is not for you.

The heat and the humidity can be a bother and the sambhar rice is a bit too spicy for my north Indian palate.

But my fellow diners, men and women who include poor daily wage labourers, housemaids, college students, and middle-class office workers, are not complaining.

The portions are big and most describe the food as “delicious”.

Lakshmi, who works in the neighbourhood as a housemaid, is a regular at this canteen.

“Earlier, my employers would give me leftovers, but now I come here for breakfast, lunch and dinner every day. For less than 20 rupees, I can eat three meals here,” she tells me.

“This food is really good. I like all the dishes. My stomach’s full and I’m happy,” she says, patting her belly.

What’s on the menu?

Raju, a construction worker from Punjab, was introduced to the canteen by his co-workers.

The canteens were first started in 2013 in Chennai by Ms Jayalalithaa, who is popularly called amma (mother) – hence the name amma canteen – with the aim to provide subsidised meals to the public.

Today, there are more than 300 such eateries in the state – at least half of them in Chennai alone. They serve simple breakfast, lunch and dinner every day of the week.

Click here to read the full story via the BBC