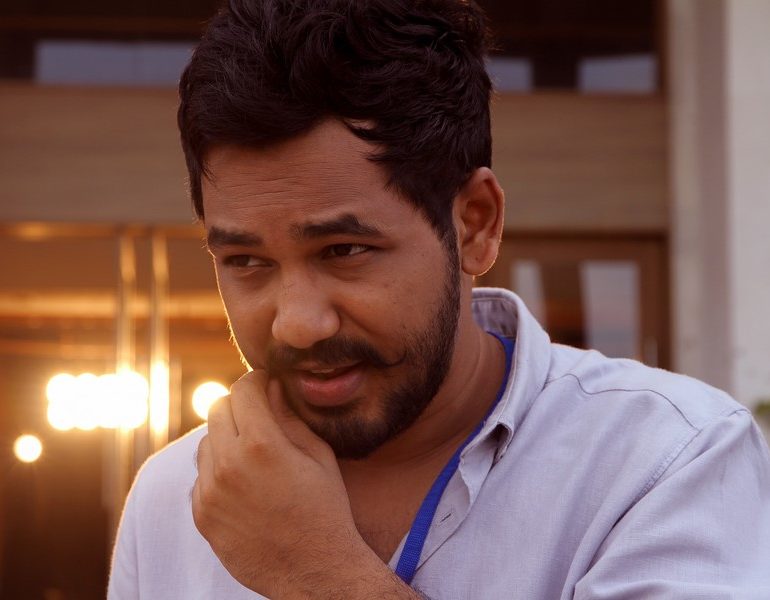 This will be Kharesma’s second time recording for Hiphop Tamizha, the first was for the hit song “Kadhal Cricketu” from the 2015 film “Thani Oruvan”.

At 14 years old, the youthful Kharesma received her first break into Kollywood with a song by the highly acclaimed music producer Harris Jeyaraj. She now spends her time between the UK, Sri Lanka and Tamil Nadu where she records.

Founded in 2010, Hiphop Tamizha’s Aadhi & Jeeva are seen as the pioneers of Tamil Hip Hop in India. They have dedicated a verse in the song to fellow Tamil hip hop artists across the globe, some of whom have inspired the duo to begin their journey.

Meesaya Murukku (twist the moustache) is the title of the song and the upcoming film in which Hiphop Tamizha makes their directorial debut. If directing the film and composing the songs wasn’t enough, Aadhi, the more recognisable face in the duo, serves as the writer and stars in the lead role.

And why wouldn’t he play the lead role? The film is about Aadhi’s journey in the independent music scene, making his mark and fighting the norms of society to become an inspiration to a new generation of artists across Tamil Nadu. The film has been in the pipeline since 2013, finally completing in late 2016.

You’re probably wondering why this sounds quite familiar. A film about an underground music scene, the rapper plays himself, could this be our 8 mile? We shall see.

The Evolution of the independent music scene

Tamil independent music is a relatively new branch of Tamil music, which has exploded in popularity over the past 10 years, thanks in large to the Tamil communities in the diaspora. The other branches include classical, folk and cinema which originate from Tamil Nadu.

To be classified as a Tamil independent song, the song’s purpose isn’t to assist in the marketing of a cinematic release (or composed to fit within the plot of the film writers screenplay) as is the case with 90% of the songs currently released. Yes the description is quite broad, and should be seen as work in progress as the industry evolves.

It was not until 2005 with the introduction of youtube’s embeddable video player, along with a handful of music websites & radio shows dedicated to promoting local talent, did the vision of a global scene begin to unfold. Krishan Maheson’s J-Town story, a song about Sri Lanka’s civil war, was one of the earliest music videos to utilise youtube’s new technology.

The word “viral” only made sense within the Tamil music context with the arrival of Malaysia’s Tamil Hip Hop icons Yogi B & Nakchatra, with their hit song Madai Thiranthu! So infectious was their sound, Yogi B & Nakchatra received television & radio play across Tamil Nadu making them a household name, leading to collaborations in Kollywood.

Following Bollywood’s lead in utilising diaspora talent, Kollywood producers finally realised that featuring Tamil independent artists would not only bring in a fresh & authentic sound but could also be beneficial at the box office.

The last 5 years has seen several popular independent artists from the diaspora crossing over into the Tamil mainstream, lending their vocals to Tamil film songs by acclaimed composers from Tamil Nadu, including AR Rahman, Yuvan Shankar Raja, Anirudh Ravichander, D.Imman and Hiphop Tamizha.

We look forward to Hiphop Tamizha’s directorial debut and congratulate the team in bringing Tamil independent music to the Tamil Nadu masses.