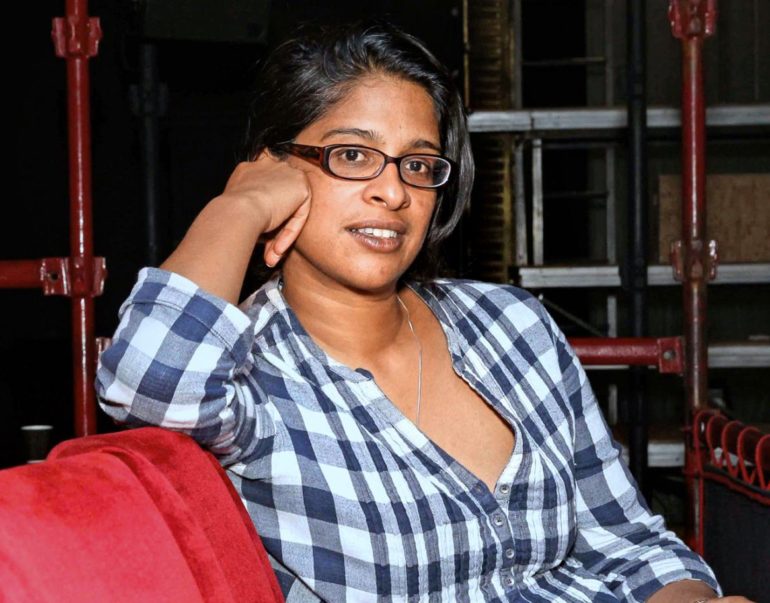 Born in Sheffield to Sri Lankan Tamil parents, 43 year old Indu Rubasingham is the director of the Tricycle Theatre in London. After the theatres decision not to host the UK Jewish Film Festival as it was part funded by the Israeli government, Indu has been facing a barrage of condemnation. She hits back in an interview with the Evening standard.

The director of Kilburn’s Tricycle Theatre angrily hit back today at accusations of Antisemitism following the cancellation of the UK Jewish Film Festival because part of its funding came from the Israeli government. “I would hate to have to feel the need to put it on record, given my work and my policy, but I am not anti-Semitic or anti-Israeli,” says Indhu Rubasingham, 43, who has run the theatre serving London’s most ethnically diverse borough for two years.

Actress Maureen Lipman, MP Jonathan Djanogly and commentators Stephen Pollard and Melanie Phillips joined a host of angry posters on social media condemning the Tricycle, and former MP Louise Mensch stated on Twitter that the venue “should be boycotted by every decent person in north London and especially every Jew or friend of Jewish people”. Speaking exclusively to the Standard, Rubasingham says she will “tough it out” despite losing sleep and suffering anxiety, and insists the row grew out of her desire to keep the Tricycle “politically neutral in a very combustive area” over the horrifically fraught conflict in Gaza.

She says it is “completely wrong” that she has banned the festival of 26 films, which was due to take place in November, or exercised any sort of artistic censorship. Rather, she asked its organisers to forgo the part of their funding that came from the Israeli embassy so that the Tricycle should not be “perceived as taking sides in a very emotional, passionate situation”. The theatre itself offered to make up the shortfall, she says, but the UKJFF pulled out itself. Still, festival founder and executive director Judy Ironside accused the Tricycle of choosing “a boycott over meaningful engagement — to the great detriment of this celebration of Jewish culture, which is of course intrinsically connected to the state of Israel”.

Rubasingham refuses to take the blame. “I absolutely want the festival here,” she says. “It is important to the Tricycle and has been here for eight years. It is a celebration of Jewish culture that is imperative and particularly important at this time.” If the situation were reversed, and the Tricycle was due to host a Palestinian or Arab film festival that had funding from Hamas or Fatah, or their avowed supporters, she says, “I wouldn’t do it”. Recently, the Labour Party asked to hire the theatre to stage a fundraiser “and I said no because I don’t want the Tricycle affiliated to any political party”.