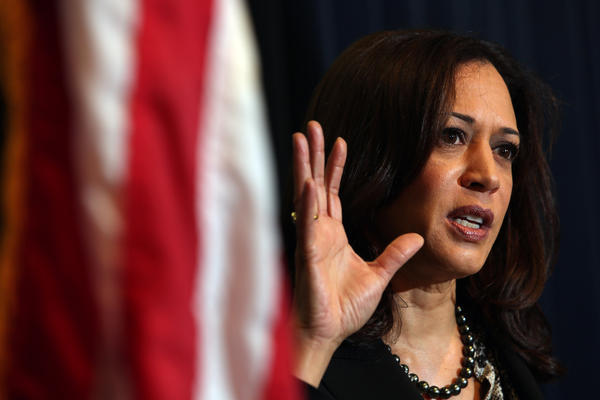 California voters on Tuesday elected the state’s first new U.S. senator in 24 years, and made history in the process.

State Atty. Gen. Kamala Harris won the race, according to the Associated Press, becoming the first black politician in history to represent California in the Senate.

With Harris cemented as the solid front-runner and Democratic Party favorite, challenger Rep. Loretta Sanchez (D-Orange) embraced the role of the underdog and attempted to stitch together support from Latinos, Republicans and moderates. But hampered by an underfunded campaign and missteps, her effort failed to take hold.

The Harris-Sanchez Senate race was the first major test of California’s “top-two” primary system, an experiment in democracy that California voters approved in 2010 in an effort to reduce the highly partisan influence of the Democratic and Republican parties and give independents and moderates more clout in the political process.

But having two Democrats face off in the general election also may have dampened interest. Perhaps because a Democrat was guaranteed to win no matter the outcome and not sway the overall balance of power in the Senate, the race failed to entice well-heeled donors or deep-pocketed super PACs, unlike other hot Democrat-versus-Republican Senate contests across the nation.

The Senate race also was largely eclipsed by the daily theatrics and turbulence of the nation’s presidential race, leaving up to a third of California voters undecided just months before election day.

Harris, the first woman elected as California attorney general, will succeed Democrat Barbara Boxer, who is retiring after serving four terms in the U.S. Senate.

Harris, the daughter of immigrants from Tamil Nadu in India and Jamaica, becomes only the second black woman ever elected to the Senate.