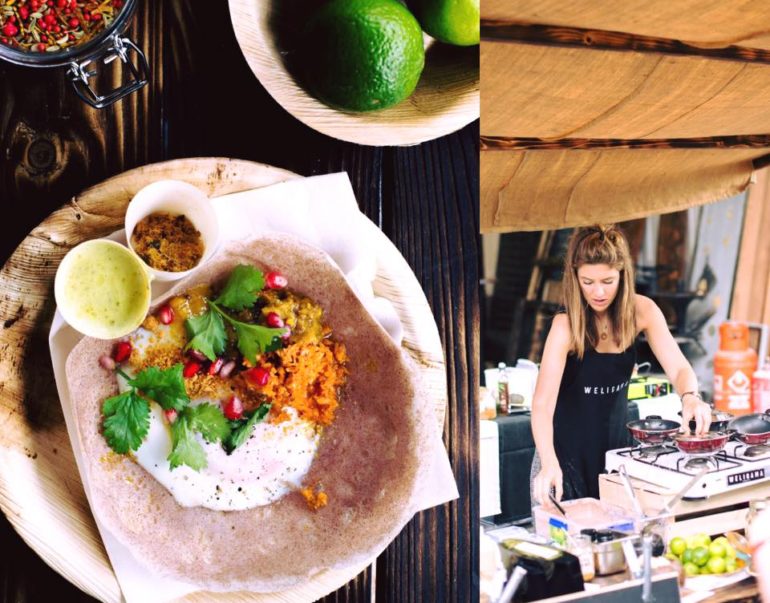 Popularly known as Appam in Sri Lanka , South India and amongst the Tamil diaspora, the lighter way to eat curry will be on the lips of Londoners!

Ex Ducksoup chef Emily Dobbs launched Weligama earlier this year. Since then, the pop-up has been gifting London with a whole new street food experience. Inspired by her favourite cuisine, Emily creates savoury pancakes laden with spices, sambals and a runny egg. After swooping in on Emily’s Druid Street stall, we pinned her down from her one-woman Weligama show to ask her a few questions about why London is going poppers for hoppers.

Where do you get your ideas?

I’ve explored all over Sri Lanka and London to get ideas. From South Harrow, Southall, to East Ham and Tooting. And I’ve read every Sri Lankan cookbook that has been translated.

What’s the background of the hopper in Sri Lanka? When/how are they traditionally eaten?

They are traditionally called ‘appa or appam’ and typically eaten for breakfast or snack. They are notoriously difficult to make…! And messy to eat. My advice is to roll up your sleeves and dig in. Then have a second or third.

When did you have your first hopper experience?

I’ve only eaten Hoppers a couple of times in Sri Lanka. It was reading Peter Kurvita’s cookbook that inspired me to cook hoppers. It took me many months and numerous failed attempts to achieve the perfect hopper batter. They are not easy! Which might explain why they haven’t been done before in London.