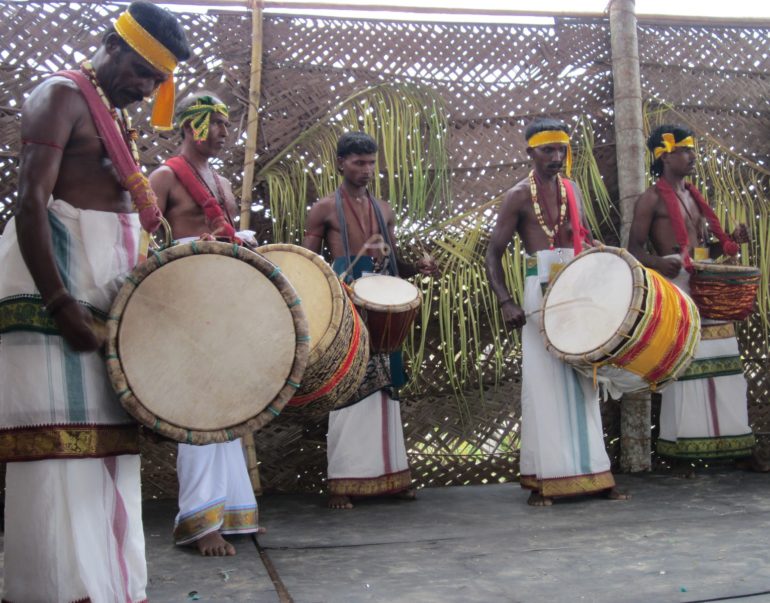 Having lived through war and displacement Keeping tradition alive

Parai is an ancient percussion instrument that was played at temple festivals and funerals. In the bygone era, it was used as a tool for making public announcements during special occasions. The artistes from Kanakaraayankulam  in Vavuniya North and Mulliyawalai in Mullaithivu District have preserved this particular art form for over seven generations with great care.

In the Vanni District, the parai drum enjoys a prominent position, especially rituals performed within the Tamil community. This particular group of performers, known as Parai Mela Kooththu has a distinct style of playing the parai. The group members have experienced extreme hardship during the war and due to displacement. Yet, their passion drives them to thrive and preserve their art form.

The group has eight males, and all of them have lost their belongings including their drums when they had to flee their homes in 2009, during the final phase of the war.

“It was heart breaking to leave behind our heavy leather drums in Iruttumadu in the Mullaithivu District. We did take our drums while leaving our homes, amidst bombing and shelling. We travelled on foot, bicycles, motorbikes, lorries, landmasters and tractors, still carrying the drums. One big drum weighs 20 kilograms, and extremely heavy. We carried them throughout our journey wading through water, and crossing stretches of burning sand, while heavy fighting was underway.  When we reached Iruttumadu, Mullivaaikkaal in Mullaithivu District, it was a burden we could to afford to carry. We decided to burn our drums there, and burned our souls with it. It was nerve-wracking moment, unforgettable, for the pain that caused all of us” 51 year-old Kaaththamuththu Annalingam from Mulliyawalai in Mullaithivu District said emotionally.

“We went back to Iruttumadu, Mullivaaikkaal where we burnt our drums after returning from the Menik farm for the Internally Displaced Persons. We were in tears. The memory of our loss haunts us everyday” said 39 year- old Sellakkandu Baskaran from Mulliyawalai, a passionate drummer.

Vadivelu Jayakodi began playing the special drum as a child. His father and both grandfathers were former Parai Mela drummers in Vanni, where Parai Mela Kooththu is now a rapidly declining art form. It is a legacy that most of the drummers share, a tradition passed down the generations.

“Beating the drum in different ways, helps me to overcome the loss and trauma I went through during and after the war” says 19 year-old Murugan Ahilan.

Para Mela Kooththu drummers stand facing each other, and through their performance evoke contrasting emotions which are mirrored in their counterpart.

Hailing from the Vanni region, they perform mostly at temple festivals, including at the popular Vattraappalai Kannagi Amman, and as well as at Hindu funerals.

Parai Melam is played mostly at village temples in Vanni. The new generation drummers dislike being referred to as parai mela drummers due to the stigma attached to their particular caste. Besides, it is not well-paid job. Yet, this disappearing folk tradition should be preserved” insists Kanapathipillai Arunthaharan, Senior Lecturer of Department of Tamil, University of Jaffna.

Kanagasabapathipillai has been working as a journalist for the past 20 years in Sri Lanka. She has traveled extensively for news coverage, feature and documentary making locally and globally. She has covered the three decade long war in Sri Lanka, while taking enormous amount of risks.She is pleased and proud to note that, SHE is the first Tamil woman journalist in Sri Lanka to travel on her own to the war zone, etc to capture the moments in her camera. She trains budding journalists and youth in photojournalism and mid career journalists in various themes. Many of her creative photos have appeared on newspapers, journals, books and websites locally and internationally. She shares her experience as a journalist. She is very passionate about what she does-Journalism :-), which is an adventure. Contact Email :~ dushi.pillai@gmail.com, dushiyanthini.pillai@gmail.com