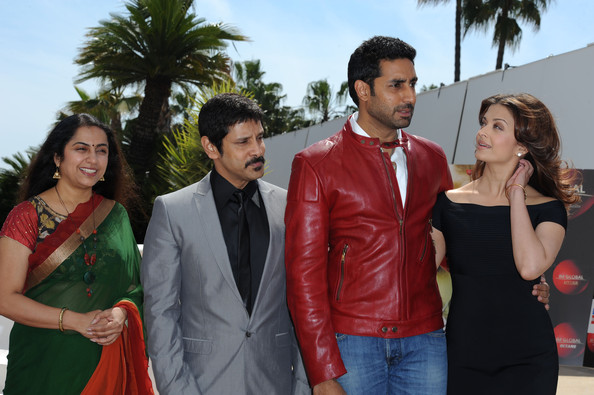 Bollywood’s Prince and Princess, Aishwarya Rai Bachchan and Abhishek Bachchan headed over to Cannes with co-star Vikram, to grace the festival with their presence and promote the much talked about Raavan.

A showreel of Raavan was screened at the promotional press conference – the film was not shown and the absence of it’s director means that he is finishing up the Tamil and Telugu versions, namely Raavanan and Villain respectively. Prasoon Joshi, the lyricist (Rang de Basanti, Delhi 6, Ghajini), was also present, as was Aishwarya’s beautiful Mum, the writer, Vrinda Rai.

Suhasini Mani Ratnam, the wife of the acclaimed director stood in for her husband and AR Rahman, who is busy with his world tour also didn’t make it to Cannes. The film will get a showing a Venice film festival outing and with it’s brilliant sound-track, it is this Summer’s most anticipated movie. Said Suhasini, an actress, woman’s rights campaigner and director in her own right: “It’s the first time that a filmmaker has attempted to blend the two. Raavan has ten heads and ten conflicting thoughts, so there’s a bit of conflict and Raavan in all of us.”

The long and tough shoot for the cast and crew was described as “torturous”. Aishwarya shared: “You’re drenched from six in the morning till seven in the evening; the day starts with a trek, going to locations and then you muddy yourself, dirty yourself, get into costume. It’s just a very demanding, consuming experience from moment to moment.”

Vikram says Aishwarya is a hero in Raavan. “There are three main characters, me, Abhishek, and Aishwarya. I’ve done a lot of tortuous sequences in the past. But this one takes the cake and the ache. And Aishwarya suffered all the wounds, pain, fever and insect bites heroically in the forest. For all the dangerous scenes, she hardly ever used a dupe. She was totally up to the task. I coped. Guys are used to roughing it out. But she fell ill quite a few times.”

GMTV’s Lorraine Kelly quizzed them about “owing it to the world to have babies, as they’ve been married for 3 years and re incredibly beautiful people”. Abhishek, with his usual humour responded: “That’s a new one – in that case, we’ll finish this interview and get right on it,” while Aishwarya giggled on.