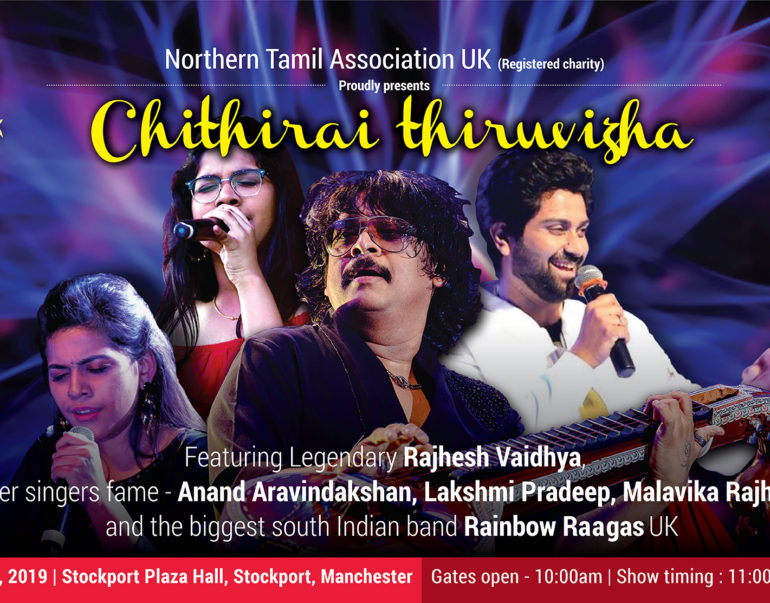 The Northern Tamil Association, a Tamil charity organisation based in the north of England is celebrating the upcoming Tamil New Year with a charity musical show on 12th of May 2019 in Stockport, Manchester.

The musical extravaganza features Kalaimamani Rajhesh Vaidhya, an ace veena player, his dexterity with this instrument is beyond explanation. Rajhesh Vaidhya, is celebrated for his fusion and blistering speed performances.

The winner of 2016 airtel super singer, Anand Aravindakshan, is going to accompany Rajhesh Vaidhya, to light the stage with his mesmerising voice. Anand has sung in many films and performed in many concerts.

Malavika Rajesh, daughter of Rajhesh Vaidhya, a very popular singer herself, will be showering us with her mellifluous voice. She came in 3rd position in Super Singer season 6.

Lakshmi Pradeep, another 2016 airtel super singer finalist, with her scintillating voice, will also be an additional arm for Rajesh Vaidhya in this UK tour.

A fantastic combination of talent! Join us for an unmissable concert for our Tamil music lovers across the UK. NTA is proud to present this unique concert.