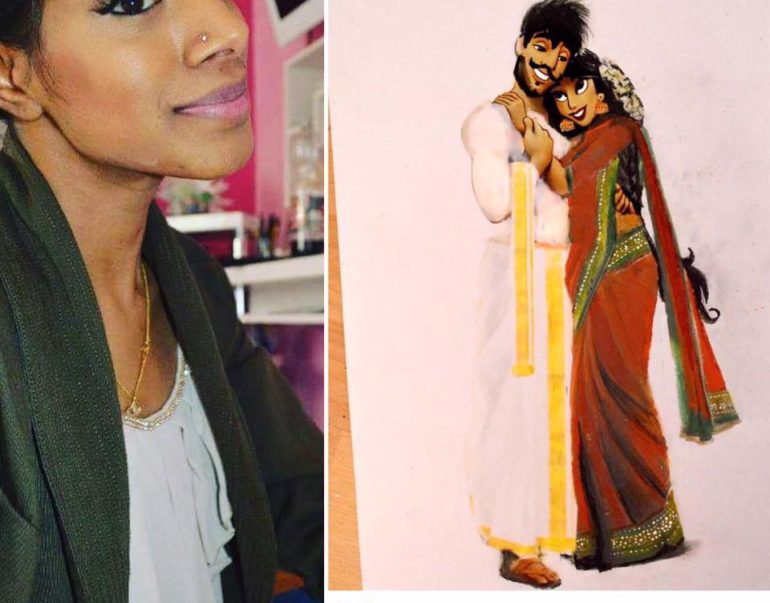 Is the world ready for a Tamil Disney character?

Disney have made progressive moves into Indian cinema with locally produced big budget films over the past few years. Isn’t it about time their portfolio included characters which represented the true India, in particular the south?

Introducing Prince Ajay & Princess Renuka, the creations of Thusyanthe Srisachiananthadasan, a Germany based sketch artist who at the age of 16 enrolled into Croydon College in London to pursue her love for art. With over 19,000 followers on Instagram, Thusyanthe goes by the name Schaya_artist, where she first uploaded her work of the South Indian / Sri Lankan inspired Disney characters.

In a recent interview with India’s Deccan chronicle, the professional sketch artist said, “The main reason I thought of this was because Disney princesses are of different nationalities. Jasmine is Arabic, Rapunzel is German, Ariel is Danish but there was no Disney couple from India. I wanted to create a princess and prince capturing my Tamil culture. That’s how Princess Renuka and Prince Ajay came about.” The response to these sketches were tremendous, “Many people shared the drawings on the Internet. Several YouTubers and celebrities like Amy Jackson shared them too! It’s so great to spread positivity.”

You can read her full interview with the Decclan Chronicle here: http://www.deccanchronicle.com/lifestyle/viral-and-trending/040416/time-for-a-tamil-disney-princess.html