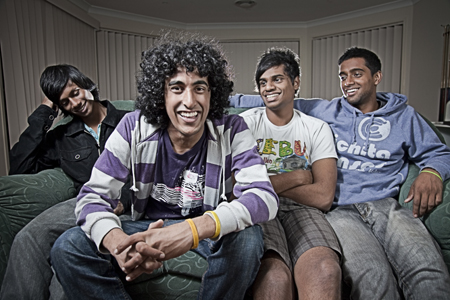 Introducing Road To Canaan (RTC), a band based in Sydney comprising of 4 young Australian Tamils: Daniel Vijayakumar (Vocals/Bass), Prashan Thevarajah (Guitar), Derek Amarasingham (Drums) and Joel Thevarajah (Guitar). RTC has performed across the East coast of Australia and their fresh rock sound combined with some hard-hitting beats and profound lyrics make their tracks both catchy and inspiring. Kavya from the Thamarai team caught up with RTC to find out more about them and their music…

Road To Canaan is an interesting and definitely novel name. What’s the story behind it?

The story behind the name. That’s always the first question. Pretty much, we wanted a name that was unique, deep in meaning, closely related to our faith but also descriptive of who we are as individuals. Now Canaan (pr: Kay-nen) was an ancient ‘Promised Land’. A place where people strived to go but constantly failed to reach. Now for us as a band, we’re also trying to get to our metaphoric ‘Canaan’. However, being human, we constantly find ourselves stuffing up, making mistakes and learning as we go. And this is kinda what we’re about. Too many people today follow what everyone else around them do and don’t strive for more. We try to tell these people to dream… And pursue their dreams…To dare to be different and live for something more. This is what we’re about and so we tried to capture that through our name.

How did you guys meet, and how did the idea of the band come about?

We grew up together. We’d always be causing trouble at church and school. But whilst we played music, we never really got into the whole ‘band’ thing until our late teens. We randomly started jamming at church one day and realised that it was something we wanted to do more often. So regular sessions eventuated and before we knew it we were playing the odd gig. The whole ‘band’ thing was just a natural progression from there.

Are you all musically trained, or self-taught? How did you get into music in the first place?

All of us initially had musical training but in the most part we are self taught. Playing together as a band has helped us refine our musical abilities and we’ve learnt a lot off each other over time. All of us got into music at a young age. We played together at church and always had a guitar handy. So the band was just an extension of our previous lifestyle.

How would you describe your music to people who haven’t yet heard it? Who are your influences?

We constantly get asked this…and our answer is come see us live!!! That way, we’re all happy. If we were to put a name to it, it’d be alternative or even a bit pop-punky with our more recent tracks. We aren’t influenced by many other bands, rather our faith and life experiences shape the mood and messages we put forward. There are a few bands we don’t mind though- Taking Back Sunday, Underoath, Fallout Boy. And then there’s our vocalist who’s got an rnb sorta vibe similar to Ne-Yo and Usher!

I understand you write your own songs. Do you pull from personal experiences? How does your song-writing happen; is it lyrics first, music later, or vice versa?

Our songwriting just happens. We never plan it and try not to force something out. We base a lot of our lyrics around our perceptions of modern society. To us, music is a medium of influence and so we try hard to handle it carefully. We don’t write about sex, drugs, alcohol and a lot of the stuff you hear on mainstream radio. Instead, we try to bring out those old school values – love, respect, humility- which we feel are still important but often overlooked in society today.

You just completed your self-titled EP (available for purchase on iTunes). What were your experiences in the recording studio like? How does it compare to being on stage, and which do you prefer?

Recording was awesome! It took a lot of time and effort but it was worth it. We had to push ourselves to get our notes and timing perfect but our EP is something we’re really proud of! We played around with heaps of sounds and brought a lot of innovation to our music. The experience was also really relaxed and refreshing. But whilst the studio was good, nothing beats playing in front of a crowd. To see people screaming, jumping, dancing around and singing is definitely the best part for us!

Your song “The Weather Girl” is sung from the point of view of a boy who is clearly hung up on a certain girl, who makes his “head spin” when she looks at him. True story for any of you?

The funniest thing is when we wrote this song, we were a bunch of high voiced teens who knew near to nothing about the ‘real world’. We used to give it to a couple of guys in the band about their ladies, not taking anything too serious and before we knew it we had something to write about. The track is about a boy hung up on a girl but the girl’s just doing his head in. He’s intrigued by this girl. She’s popular, beautiful… perfect in his eyes but she’s just ‘out of his league’… Sure won’t stop any of us though!

Talk us through the other tracks on your EP. They all seem to be making allusions to the fact that all is not quite right in society today. What are the stories behind each of them?

Yeah, we don’t like being negative but the culture we live in today is a very slippery slope. All around us there are problems and we try to present our views through song. Our desire is not only to appeal to our fans but provoke a deeper insight into our life, faith and culture. “The Colour of Truth” is a song about our wartorn motherland and the suffering of our brothers and sisters. “Heaven” was written when one of our members’ relatives passed away and “Save Me” is about our experience when many of our friends began going astray. There’s a lot more to our music but you’d have to interpret it for yourself!

Has your Tamil heritage influenced your music in any way?

Definitely! Our culture is something that permeates all we do and our music is no exception. Many people meet us and find that we don’t fit the pill-popping, body-pierced, ink covered ‘rockstar’ mould. And a large reason for this is our culture. Being Sri Lankan Tamil, we come from a culture that is conservative and hesitant to push boundaries. Sometimes this has made it hard for us to go against the crowd. But at the same time, values such as hard work, perseverance, simplicity and respect have helped us work our way into and succeed in the industry.

On top of this, there’s been a thirty year civil war in our country which has left thousands of civilians killed, amputated and given very little reason to live. Unfortunately, there has been a lack of media involvement in representing the suffering and immediate humanitarian needs of our people. We as a band feel it’s our duty to be a voice for our suffering people back home and so wherever we play, we try to get our country as well as the struggles of our people on audiences’ radars.

How do your parents feel about you guys pursuing music?

They’re cool with it. I mean, we’re still in university so we haven’t given them too many reasons to get worried…yet! But they’re heaps supportive. They put up with our blaring instruments even in the late hours of night and they’re often at our gigs to cheer us on and give us the all important feedback we need. So we’re definitely blessed!

I’m sure RTC takes up the majority of your time, but what do you all do in any spare time that you find?

Sleep. Eat. Sleep some more. Watch ‘How I met your mother’. Sleep again. Then play some guitar. And maybe sleep again after that. And if there’s enough time we might sneak in some ‘Call of Duty’ or PS3. And then we’ll sleep after that too… Oh yeah, and if there’s an exam coming up we may put in a little study!

Tamils and Rock music…it’s not a combination that is well-known within the community. Why do you think this is, and how do you plan on making your music reach people within our community as well?

Most Tamils don’t listen to rock. They’re mainly into hip-hop and rnb. And within our culture people aren’t encouraged to take on careers in music and the arts. So it’s a combination of these factors that makes us so ‘different’ in what we do. In terms of making our music reach people, we find that online communications are most effective. So we use Facebook and Youtube a lot. In terms of live sets, we play a lot of rnb covers to appeal to the hip-hop loving crowd. But at the same time we try to define a style of our own.

Most performers will agree that being on stage gives the biggest rush and is the best feeling ever. Do you guys agree too? Any of you get nervous before performances? Any pre-gig rituals?

Being on stage is amazing! Especially when the crowd is responsive and energetic. It’s an awesome feeling! As with any performer, there’s always nerves. But when a crowd starts to go nuts, the nerves usually fade away.

Do you have little disputes among yourselves? If so, what do they tend to be about? Music? Lyrics? What to wear on stage?

We don’t really have ‘serious’ disputes amongst ourselves. We usually talk any issues through and keep open communication. I think the fact that we grew up together makes it hard for us to ‘fight’. Most of the time we’ll be dissing each other about stupid things – girls, musical tastes, people we met at gigs. Kinda just like mates do. But in terms of serious issues we haven’t had any problems yet.

What sets RTC apart from other bands?

We’re brown! That’s definitely something different! A lot of people also say we’re a lot more interactive with the audience than other bands. Dan has a tendency to talk for ages and keep the audience interested with some really random (and stupid) stories. So whilst being Tamil definitely sets us apart, our attitude is also very distinct.

Say you were to be locked in a room with only one piece of music to listen to on loop for 24 hours, which track would you choose?

Wow…well our taste in music is diverse so it’s really hard for us to settle on ONE track that we’d all enjoy on a 24 hour loop!! I can’t speak for the others, but maybe some Maroon 5 or Blink 182. Maybe even some Bach! But seeing how I (Prashan) have a say here, I would say New Manic Art – Trial Kennedy. I would be so sick of it by the end though.

What would you like to say to our readers and your fan-base?

Thank you so much for supporting us and taking the time out to read this! Without your support we wouldn’t be anywhere today. It’s amazing how many people know about ‘Road To Canaan’ and it often surprises us how far our music has gone. And that’s a tribute to everyone who’s listened to and shared our music with their friends. We hope you’ll continue to stick by us and keep in touch – on Facebook, Youtube and Twitter. And we hope to keep giving you the music you like!