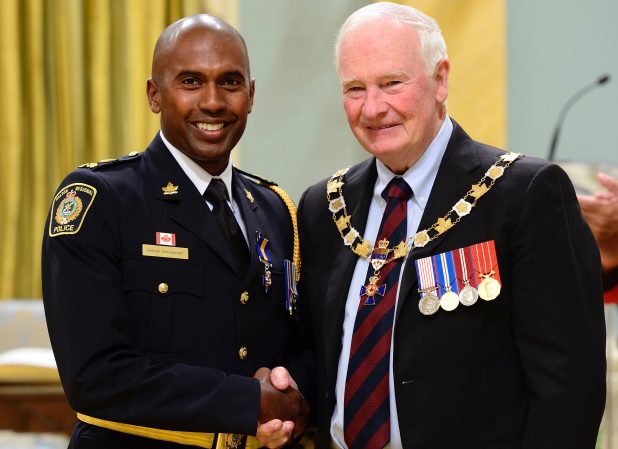 Canadian Tamil Nishan Duraiappah was first introduced to the Police force as a high school student, participating in an inaugural Police Ethnic and Cultural Education Program (PEACE) in 1991. The experience inspired him to pursue a career in policing. In December 1995 Nishan was sworn in as a constable in Halton Hills, located in the northwestern end of the Greater Toronto Area.

Throughout his career he has worked in the Regional Drug & Morality Bureau, Guns & Gangs Unit, District Criminal Investigations and with the RCMP Combined Forces Special Enforcement Unit. He has also had a strong commitment with many of the Region’s diverse, cultural, and faith communities as the Halton Police Diversity & Cultural Relations Coordinator.

“It’s a humbling experience to be included with the other Canadians who’ve been conferred this Order of Merit,” said Duraiappah. “The reality is many officers daily set out to create meaningful impact in their profession and in their community – it’s what makes our police agencies and our country so great. Personally, meeting His Excellency David Johnston with my family amidst the grandeur and history of Rideau Hall was also a great highlight.”

Halton Police Chief Stephen Tanner, who is also a recipient of the Order of Merit, congratulated Duraiappah on his accomplishment. “Deputy Chief Duraiappah is an exceptional leader and tireless community advocate who is a most deserving recipient of this prestigious award. It is my honour and pleasure to extend my congratulations to him on behalf of our service and the people of Halton.”