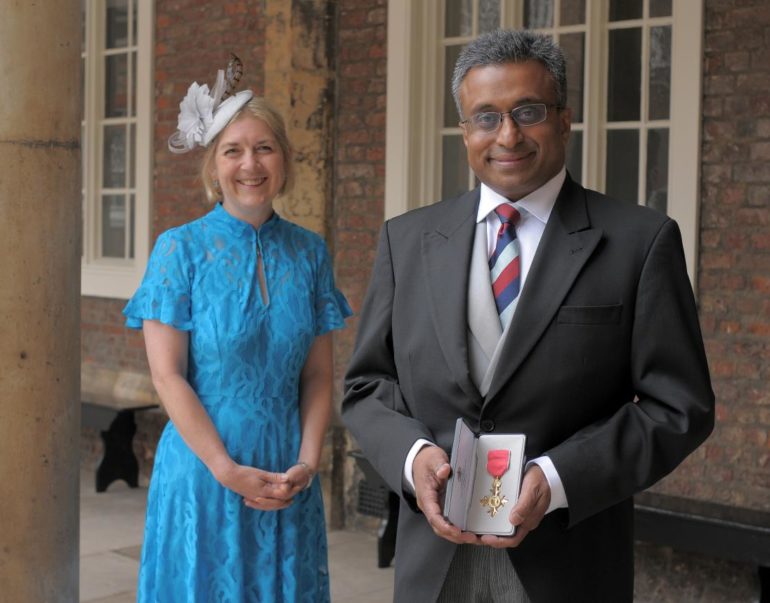 London based intensive care consultant Ganeshalingam Suntharalingam is pictured here with his wife Kim after receiving his OBE.

The British Tamil consultant from Northwick Park and Ealing Hospitals, and former President of the Intensive Care Society, received his award from Prince Charles for services to the NHS before and during the pandemic.

The pair had previously met when the Prince had opened Central Middlesex Hospital some years earlier.

He also had the chance to personally thank food writer and fellow OBE winner Nigel Slater for inspiring many years of home cookery.

Ganesh said: “It was a fantastic day, and for me it was very much on behalf of all my NHS Trust and Intensive Care Society colleagues who have put so much of themselves into the last 18 months. What really struck me was the diversity of people receiving honours, and how much the Palace staff and military volunteers went out of their way to make everyone feel at ease”.

The presentation in the Throne Room was subject to Covid-19 restrictions but Ganesh and his wife Kim spent some time chatting with the Prince about the pandemic and her field of work in new drug development.

“It’s been a real privilege to stand with such brilliant colleagues through such difficult times, and this award is for them, as well as all our spouses and families who have done so much to support us.”