From model to Actor, John Abraham has been busy shooting the political thriller titled ‘Madras Cafe’ in which he stars an Indian intelligence agent. It has been reported that he has learnt a little Tamil, Thai & Sinhala for the film.

The film first came to life known as ‘Jaffna’ with many in the Tamil community wondering if the film would paint a true account of the civil war in Sri Lanka between the Sri Lankan government & the Tamil Tigers, who fought for a seperate state called Eelam. 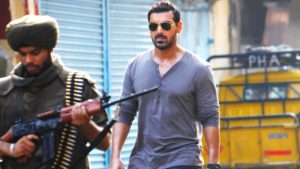