After 1727, waves of Tamil immigrants entered Mauritius from Southern India. The first to arrive were merchants and masons during the French rule, followed by a wave of labourers brought in during the British period to work their sugar cane plantations. Today, the island nation is home to roughly 115,000 Tamilians, who have established a deep-rooted community there that is rich with Tamil culture and religion.

One of those 115,000 Tamil Mauritians is singer Vaanu Pillai, who has slowly but surely caught the public’s eye with her debut album “Parakkiraen”. “Thamarai” recently sat down with Vaanu to talk to her about her music, her album, and her band “Dodo Crew”.

Born in India to Tamil Mauritian parents, Vaanu and her family decided to move back to their home country when she was 4 ½ years old. The move itself, she says, is a bit of a blur. “To be honest, I don’t remember much about the experience except for a few incidents and events that are neither here nor there. However, my tender age helped in adapting to the new place, its people, and also the language. The switch from Tamil to Mauritian Creole was probably the most memorable thing about that time, but being a child helped tremendously and made the transition very easy.”

Despite the move, however, her parents made sure that she wouldn’t forget her Tamil culture and identity. “I had a very South Indian upbringing, unlike my Mauritian peers. Even compared to my Tamil friends, I was overall exposed to more Tamil films, music and culture. We had a couple of films and cassettes that my parents had brought when coming to Mauritius which were played over and over throughout the 80s. Sometimes we would even exchange with a few other families who shared the same interests, which was very rare. Nearing the end of that decade, Mauritian television and radio channels also began to cater more to the regional languages and we got to listen to fairly updated Tamil tracks as well.”

Her musical training, though, isn’t restricted to listening and singing along to cinema songs. “Growing up in Mauritius, I attended the Indira Gandhi Centre for Indian Culture, where I completed a diploma in Carnatic vocal. That was when the groundwork of my musical education and career was laid. That was also when I was lucky enough to receive training from masters such as Mr Unni Krishnan, Dr Rukmini Ramani, and Ms S. Rajeshwari. That gave me the confidence to then successfully participate in several national singing competitions and National Tamil Drama Festivals.” 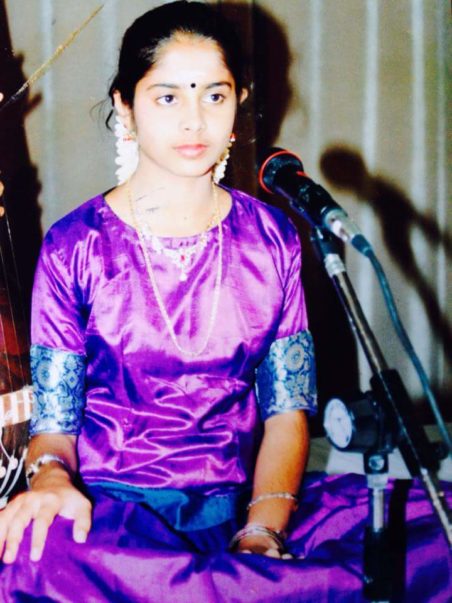 It was also during this time that Vaanu made her first experiences as a band member. “When I was nine, I joined an orchestra called “Sargam”. Together we would regularly perform Tamil and Hindi songs at live shows and on TV during the holiday seasons and on festive occasions.”

Fast forward a few years later and “Sargam” has been replaced by “Dodo Crew” and Mauritius has been replaced by London. “Back then I only left “Sargam” because I was moving to India. While I have always performed as a solo artist in Mauritius and later on also in the UK – having been part of orchestras for the better part of my life – I’ve also always enjoyed the friendly, almost family-like atmosphere that existed during our shows and travels. With a band, you have a spirit that is totally different and so much stronger than when working as a solo artist.

“One of the most challenging and satisfying things about teamwork, something I learned especially after my collaboration with Dodo Crew, is the creative process. As a group, we aren’t only sharing space, but also our very own creative input, which – when successful – gives way to our distinct collective sound. And that is something very special.”

What is also very special about Vaanu and her collaboration with Dodo Crew is how it all began. “How Vaanu met her Dodo Crew”, if you will.

While some of us use the internet to buy new furniture, clothes, or a car, Vaanu used the internet to find herself a band. In India. “I was literally just browsing the web and looking for contemporary Indian artists and bands. I was talking to people here and there and finally (also luckily) I came across a few like-minded musicians and put forth my idea for a Tamil album. And once they were game for it, I flew over and we had a session.” And that, kids, is how Vaanu met her Dodo Crew.

“The biggest challenge without a doubt is being on different continents – me in London and them in India. As a band, we have to sit together and compose and this process is what makes the experience unique and highly gratifying.”

But finally, after a year of writing, composing, a year of jet-setting between the UK and India, their debut album was ready. “I’ve been itching to record my very own album for years. And not any Album. I wanted to record a Tamil album. Although my mother tongue is Creole, although I’m Mauritian, although my team members are all Malayali, “Parakkiraen” was never to be anything but a Tamil album. Partly because despite by Mauritian upbringing I still strongly identify as Tamil. Partly because musically I was mainly influenced by Tamil music – be it cinema or Carnatic music. And partly, to be honest, also because I had never sung in either English or Creole and I wasn’t sure I could do a good job in those languages.”

Whether Vaanu could have done a good job singing in English or in Mauritian Creole, we don’t know. What we do know is that she has done an excellent job singing in Tamil!