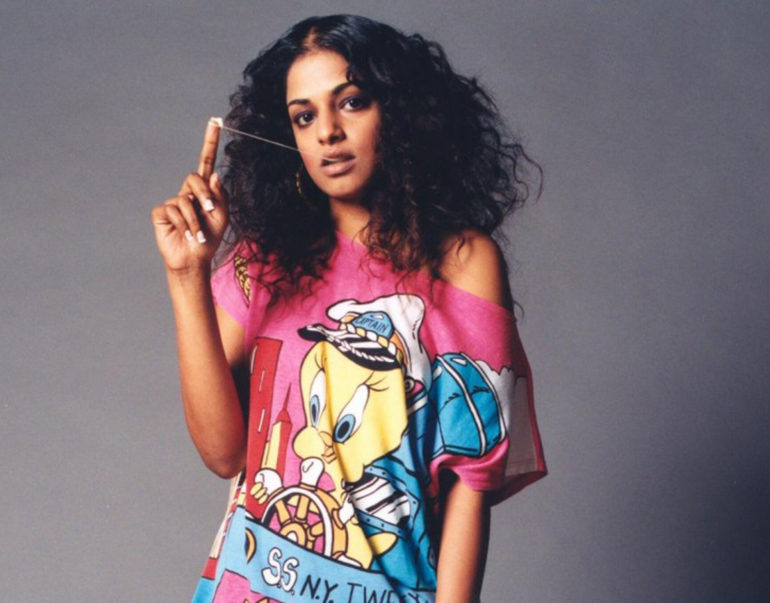 M.I.A, the Tamil rapper of Sri Lankan origin is buzzing around the web again. Whether it is her politics, her personal life or her record label, she showcases her colourful personality in many ways.

With her son, Ikhyd Arular Bronfman turning 1 year old, M.I.A has been allowed back into the UK from US, where she lives with her record company scion fiance, Ben. She told the world she was retiring, not so long ago, but her 3rd album is on the way and much anticipated. Her fans remain loyal and she is one of he few British Asian musicians to conquer the US in such a way.

Her first album, named after her father, Arular made critical waves and her second, Kala, named after her mother did the same. She teams up with Diplo and Rusko, amongst others, for her hugely anticipated third. Her record label, N.E.E.T has the likes of Blaqstarr and Sleigh Bells signed on and as usual, her energy and creativity screams forward.

Of politics, she tells NME: “I’m always encouraging people to be more vocal. Google’s more powerful than any government now – people think it’s God. They’re storing all our data and one day they’re gonna turn against us.”

Recently, M.I.A hit the news for being very vocal about Lady Gaga and her blatant product placements in videos: “Are they even interested in making money from music anymore? Lady Gaga plugs 15 things in her new video. Dude, she even plugs a burger! That’s probably how they’re making money right now – buying up the burger joint, putting the burger in a music video and making loads of burger money.” She continues on the Gaga tirade: “There’s Lady Gaga – people say we’re similar, that we both mix all these things in the pot and spit them out differently, but she spits it out exactly the same! None of her music’s reflective of how weird she wants to be or thinks she is. She models herself on Grace Jones and Madonna, but the music sounds like 20-year-old Ibiza music, you know? She’s not progressive, but she’s a good mimic. She sounds more like me than I do! That’s a talent and she’s got a great team behind her, but she’s the industry’s last stab at making itself important – saying, ‘You need our money behind you, the endorsements, the stadiums’ Respect to her, she’s keeping a hundred thousand people in work, but my belief is: Do It Yourself.”

M.I.A is certainly not a fan of reality TV shows like X Factor: “I’m not a ‘showbiz’ person. I got signed and made an album without playing a show. I scouted four different people to sing ‘Galang’ before I put it out as my own demo.”

She also remembers where she came from before reaching immense success and her constant charitable causes in the 3rd world: “Back in 2003 I was in a bedsit, hand-spraying every 12-inch and just wanting to make art. Everybody gets turned into a product push so fast – these weird ‘hipster’ parties promoting Red Bull or whatever. There’s a difference between saying ‘no’ to everything and ‘yes’ to everything. I’m not Coldplay because I said ‘no’ to certain things. When I did my ‘selling-out’ show for MTV they made me a hundred grand and I built a school with it in Africa.”