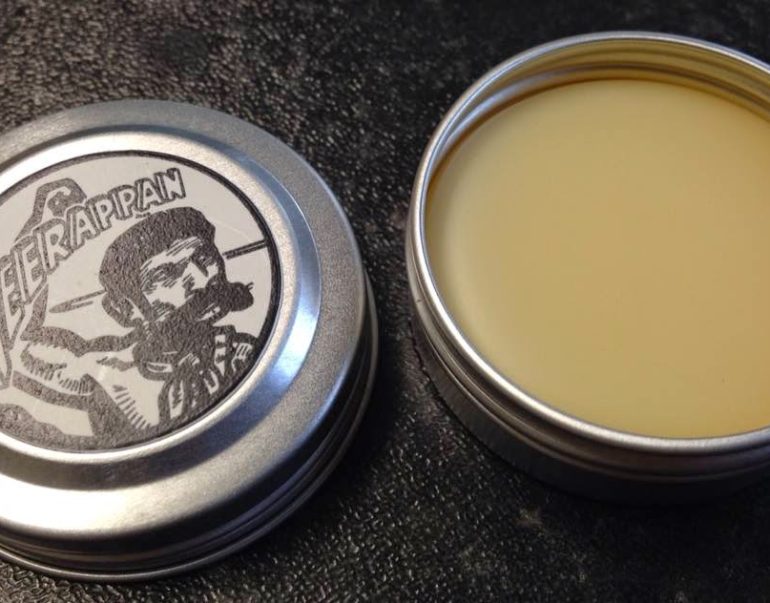 Soften a little between your fingertips, then work evenly through your moustache for shape and definition. Packed with beneficial waxes and oils, including castor oil, candelillia wax, Japan wax, rose wax, and two types of sandalwood oil – your ‘tash will be slick, styled and conditioned.

Would the notorious Tamil bandit ‘Veerappan’ have ever imagined that he would posthumously become the inspiration for a male grooming product stocked at  ‘Lush’ stores across the UK for £10 a tin?

Lush who produce fresh handmade cosmetics, have recently created in their kitchen a moustache wax called Veerappan, after the kidnapper, smuggler and poacher commonly known as the Sandalwood smuggler!

The product has been well received by the lads. Here’s what maketh-the-man.com had to say:

“Rated very highly on my list of favourite moustache waxes, is the subtle but tremendous smell of Lemongrass and Sandalwood which you’ll find yourself pulling bizarre faces, trying to inhale your moustache as the scent is long lasting throughout the day.”

Veerappan bushy moustache was just as epic as his story. Evading arrest for over 20 years, Veerappan hid out in forests across the Southern Indian states of Karnataka where he was born, Kerala and Tamil Nadu where he was killed. A bounty of $830,000 was offered for his capture, a small sum considering he was wanted for poaching hundreds of elephants and smuggling ivory worth US $2,600,000 and about 10,000 tonnes of sandalwood worth approximately US$22,000,000. To learn more about Veerappan who died aged 52, we recommend reading his obituary in the economist.

The product range doesn’t end there. The love for Veerappan goes right to the top of the company. Lush was created by founder Mark Constantine and his son Simon who have an offshoot company called Gorilla Perfume. The pair (both professional perfumers) have created a perfume called Smuggler’s Soul. Based on a trip Simon took around the world sourcing sandalwood, the illegal trade and their adventures following it have not only inspired the fragrance but also a graphic novel – On the Trail of Sandalwood Smugglers.

Here are the links to the new products