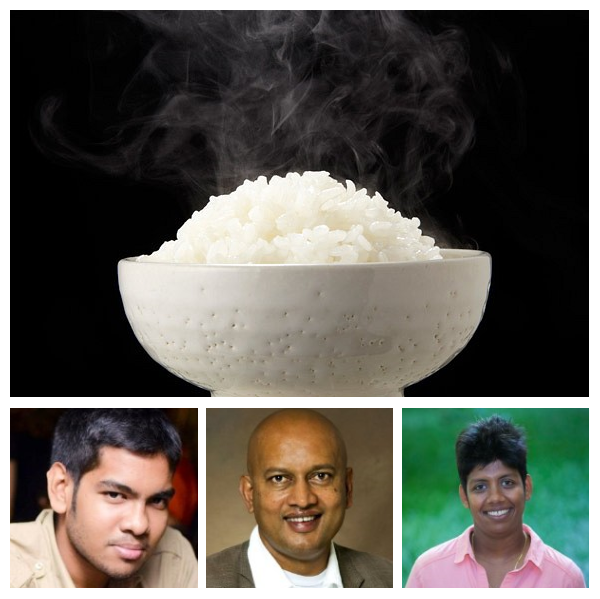 A team of Tamil scientists from Sri Lanka & USA have discovered that cooking rice with a teaspoon of coconut oil then refrigerating it for 12 hours, reduces the number of calories absorbed by the body by more than 50%! Sudhair James, Pushparajah Thavarajah & Dil Thavarajah’s research work was selected by the American Chemical Society ( ACS) and presented in Denver, USA on March 2015.

It sounds too good to be true but a simple change to the way rice is cooked could reduce its calorie content by 60 per cent.

Scientists in Sri Lanka have discovered that cooking rice with a teaspoon of coconut oil then refrigerating it for 12 hours more than halves the number of calories absorbed by the body. The change remains even if it is reheated.

The researchers from the College of Chemical Sciences in Colombo, Sri Lanka, say simply changing the way rice is cooked could help tackle the obesity epidemic.

“Because obesity is a growing health problem, especially in many developing countries, we wanted to find food-based solutions,” says Dr Sudhair James, who is at the College of Chemical Sciences, Colombo, Western, Sri Lanka.

“We discovered that increasing rice resistant starch (RS) concentrations was a novel way to approach the problem.”

By using a specific heating and cooking regimen, he says, the scientists concluded that “if the best rice variety is processed, it might reduce the calories by about 50-60 percent.”