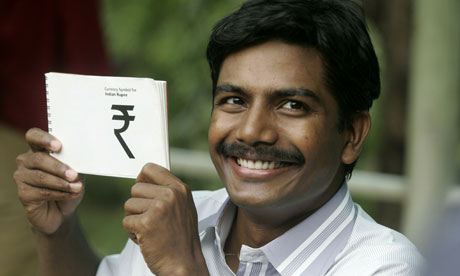 The Tamil designer behind the new Indian Rupee

The Indian Rupee got a new look thanks to a teacher at the Indian institute of Technology. The Tamil designer behind the new look is Chennaite, Dharmalingam Udaya Kumar whose winning entry was chosen by a panel of officials, artists & bankers.

A nationwide competition was launched back in March 2009 and the brief was to design a symbol that captures the ethos and culture of India. Approved by the government, the new symbol is a cross between the Roman letter R and its Hindi equivalent. As India’s economic strength grows, the hope is that the new symbol will be easily recognisable as the dollar or pound.

Kumar and the other 4 finalists each take home prize money, with Kumar’s pot amounting to £3,500 ($5,350). The biggest prize for Kumar will be the knowledge that his design will now be the ‘identity of the Indian currency’ and be seen on bank notes and computer keyboards in India.