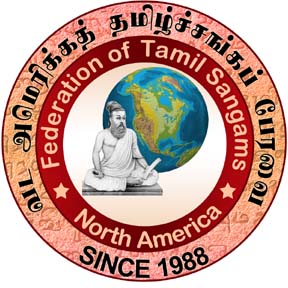 FETNA 2010 – A celebration of Tamil Culture in North America

During July 4th weekend Waterbury, Connecticut was bristling with activities full of glamour, grandeur and color. This was one of the biggest celebration of Tamil culture in north america, a Tamil Convention hosted by Tamils in Connecticut. FETNA is a non-profit, nonpartisan, literary, cultural organization and attracts nearly 2000 Tamils each year. Everyone had something to look forward to.

Tamil recognized as a classical language, is one of the ancient languages of the Dravidian Era and has a recorded history going back 2 millennia, with rich cultural heritage and classical literature.

For the last 23 years Federation of Tamil Sangams (Associations) of North America, called FeTNA, an umbrella organization for nearly 35-40 state-level organizations, presents a Mega event each year in a different state and city where Tamils of North America congregate, celebrate their culture, recognize community achievements, organize professional forums, enjoy Music, Dance, Literature and Theater performances, rejoice meeting Kollywood artists, film and music directors, eminent speakers/poets, soap opera stars from India. The locals also get to showcase their talent in this 3-day mega Event. Even for a non-Tamil, the language is not a barrier. There is so much for the eyes, the ears and the palate.

July 3rd evening was a treat for the ears as all the chief guests gave their speech. While Prof.Sultana, Poet Thamarai and Director Bharathiraja gave excellent speech, Actor Vikram took questions from the audience and gave fitting answers to them. Comedian Actor Santhanam was as usual hilarious during his speech.

On Sunday July 4th evening, there was a special Tamil folk opera called Madhurai Veeran (the hero of the city, Madurai, in Tamilnadu) or “Therukoothu”. This is a street play like a village theater and is an ancient art form with simple props and informal interaction with the audience that makes it very entertaining. The artists were from Chennai, India and are specially trained in this tradition of art from a very early age. This program had full audience with pin-dr0p silence and the 10-minute standing ovation that the people gave after the event, showed the elegance and classiness of the performance of the artists.

On the night of July 4th, there was a light music program with songs from Tamil Movies. Famous singers Harish Raghavendra, Suchithra Karthik sang the popular numbers while the Star Vikram himself joined and sang with them, and the audience reciprocated their appreciation by applauding loudly.

Fetna also honored Top 10 Tamil Entrepreneurs from around the US. Apart from these there were other entertainment items presented by US based Tamil Chapters. There were also break-out sessions like Continuing Medical Education (CME), Entrepreneur forum, Singles’ Forum, Young Tamils Forum, Tamil Bloggers meet etc.

The entire convention was planned under the able and dynamic leadership of Dr. Pazhani Sundaram of Connecticut who was the Coordinator of the Convention. The President of FETNA, Dr.Muthuvel Chelliah, from Columbia, MD joined hands with Dr.Pazhani Sundaram by providing enormous support and guidance.

Hundreds of volunteers worked tirelessly to make this event a huge success thus earning the Tamils a definite place in Connecticut history.

Please visit www.fetna.org for all other details.