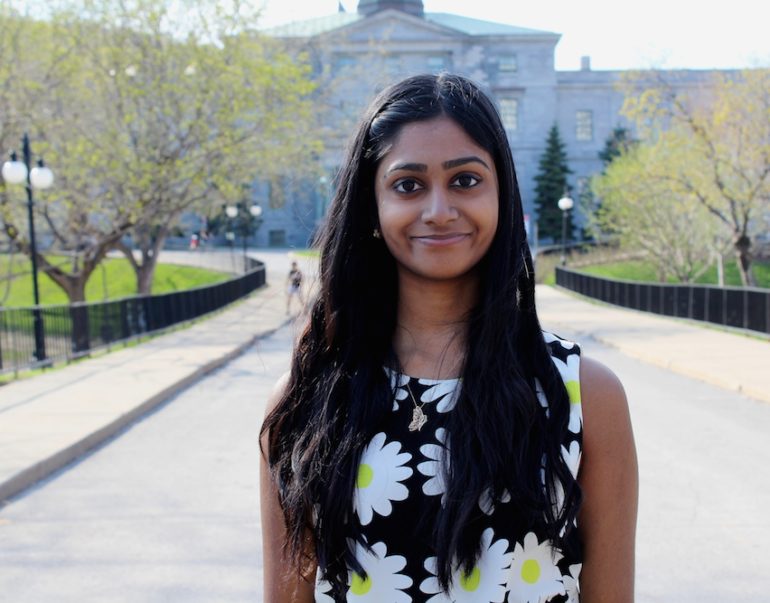 Nivatha Balendra, an 18-year-old student at Montreal’s Marianopolis College, may have found the answer to cleaning up oil spills in bodies of water right in her own backyard.

The young scientist found a particular strain of Pseudomonas fluorescens bacteria while rooting around in her backyard and along the St. Lawrence river. The bacteria is used in biocontrol methods — that is, organic solutions to controlling oil spills.

“I wanted to see if any of the bacteria found in soil samples had this oil-ingesting capacity,” Nivatha told CBC Daybreak’s Shawn Apel on Tuesday morning.

The discovery is taking the 18-year-old to Los Angeles in early May, where she’s a finalist at the Intel International Science and Engineering Fair.

“Essentially, my project focuses on a more environmentally-friendly solution to [cleaning up] oil spills, which are of course the main instigators of water pollution, and water pollution is a really pressing issue that we’re facing today,” she continued.

She can’t say for certain whether the bacteria she found are unique and never-before-discovered, and is awaiting DNA sequencing to find out.

In the meantime, her lab supervisors told her to name the bacteria after herself since it is new to the lab.

“It was pretty cool. Not every day do you get to name bacteria after yourself, so that was actually really really exciting,” Nivatha said.

Her mother, Ramani, was also in CBC Daybreak’s studios Tuesday morning. She said she was proud of her daughter’s accomplishments and of her choice to pursue her passion for science and research.

TAG :CANADIAN TAMILEDUCATIONTAMILTAMILSTAMILS IN THE MAINSTREAM