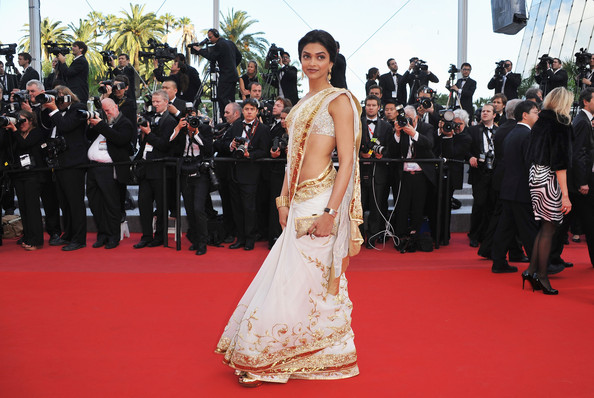 The gorgeous Deepika Padukone (Om Shanti Om, Karthik calling Karthik) has made waves on one of the most famous red carpets in the world, at the Cannes film festival. When she first arrived at Cannes, she made a bit of a strange fashion choice, with an off white ‘Anarkalli’ costume, giving her no curves or the ability to show off her stunning figure.

However, Rohit Bal, the top fashion designer, who accompanied Deepika to Cannes, redeemed himself, by dressing her in a ravishing ivory and gold sari. This was for the premiere of Mathieu Amalric’s French movie, Tournee.

Deepika shared her enthusiasm: “I am super excited because this is the first time I am going to a festival like this. It’s a great honour to represent India on such an important platform. I am also looking forward to meeting a number of dignitaries from around the globe. I don’t think I could have worn any other outfit except sari. Since I will be the face of my nation at Cannes, it’s a fantastic idea to carry a bit of your country with you on the red carpet. I am not worried about criticism or admiration for my dress. I feel very comfortable in a sari.”

While Aishwarya Rai portrayed understated elegance, with her Elie Saab blue violet dress, and a shimmering black Privé gown, Deepika’s sari was just as Rohit described, “sexy, sharp and very global in appeal.” Aishwarya Rai wore a sari many years ago to Cannes and though she has been a regular fixture there, she’s gone for more mainstream designers and never repeated the sari look. With saris rarely seen at Cannes and Deepika’s beautiful dimples, she has set Cannes ablaze with her traditional beauty.

The other big Bollywood starlet to frequent Cannes is Mallika Sherawat, who is in Cannes for her films ‘Hiss’ and ‘Love, Barack’. Sherwat, the sexy lady we saw performing Maiyya maiyya in Mani Ratnam’s Guru and Kamal Haasan’s Dasavathaaram caused a stir with her rather revealing attire during her last outing and surprisingly chose to keep it safe by covering up this year. Sherawat is based in LA mostly, these days and Tweets about her excitement about ‘Love, Barack’, which is directed by Doug McHenry (New Jack City) and stars Laz Alonso (Avatar, Fast & Furious).

In the meantime, Shekar Kapur is promoting his long awaited film Paani, which will have his long-time friend AR Rahman’s music and Danny Boyle’s (Slumdog) involvement. 10 years as a concept and much talked about, Shekar says of Paani: “Though it addresses the global issue of water, is also a love story. It’s set in a mythical world split into two – the upper city is the globalized city where lords control water; and the lower, water-stressed city is inhabited by water rats.” He added: “Adlabs and Swarovski have given me enough money to make this film as independent, so we don’t have to depend on studios. We need partnerships, not money.”

India fever has certainly caught on at Cannes, as Russel Crowe (Robin Hood, Gladiator) says he wants to head there: “I don’t mean a typical Hollywood film that happens to be set in India, but a Bollywood film. The script would have to be right, and I’d have to understand completely what I was doing. But I will have a go. I can do my own singing and I can dance a little bit. I’m in no hurry. But if something good comes my way, I will take it.”