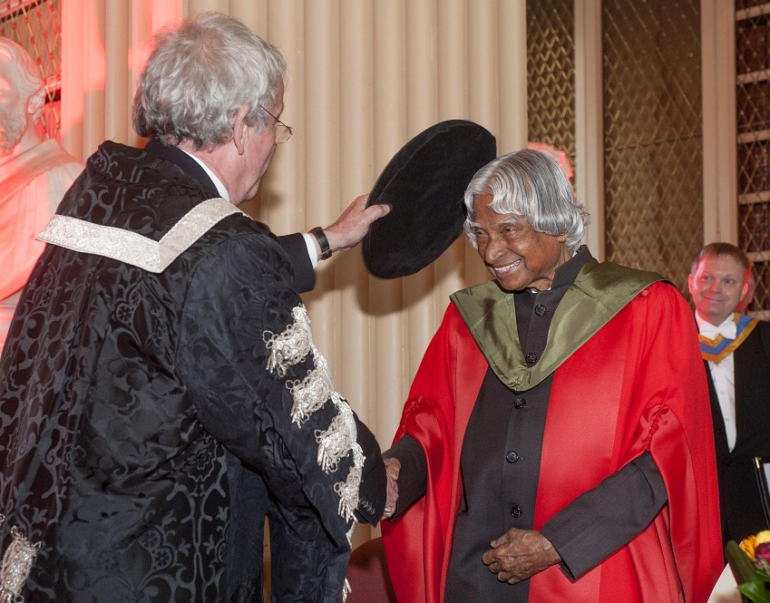 Tamilian, scientist & former president of India, Dr. APJ Abdul Kalam has been awarded an honorary degree by the University of Edinburgh for his contribution to science and technology.

Dr Kalam was in Scotland to receive the degree, presented to him by University Principal & Vice Chancellor Timothy O’Shea during a  dinner held in his honour on May 15th.

Serving as president of India from 2002 to 2007, the 82-year-old is regarded as the father of India’s missile programme.

O’Shea said, “It is a privilege to welcome Dr Kalam to Edinburgh and to present him with an honorary degree. It recognises his extraordinary work as a scientist, as a figurehead for his country and for working to tackle rural poverty and injustice over many years.”

Kalam delivered the keynote address at the inaugural conference of the University’s Edinburgh India Institute, setup to coordinate the work of Edinburgh academics who are working with a wide range of partners across India including Tamil Nadu’s leading univeristy ITT Madras.

After accepting his degree, Dr Kalam said, “This campus has been witness to some of the most historic people and their ideas which changed the world. When I was walking here yesterday and today, I saw many students walking past. I wondered, that some day back in history, through these same aisles, gardens and walkways, Charles Darwin would have walked, Alexander Graham Bell would have walked, Sir Walter Scott would have walked, Arthur Conan Doyle would have walked, Thomas Bayes would have walked too. This place is filled with wisdom, knowledge and ideas of some of the greatest mind of humanity. I feel blessed to walk in the University of Edinburgh and now to be associated with it.”