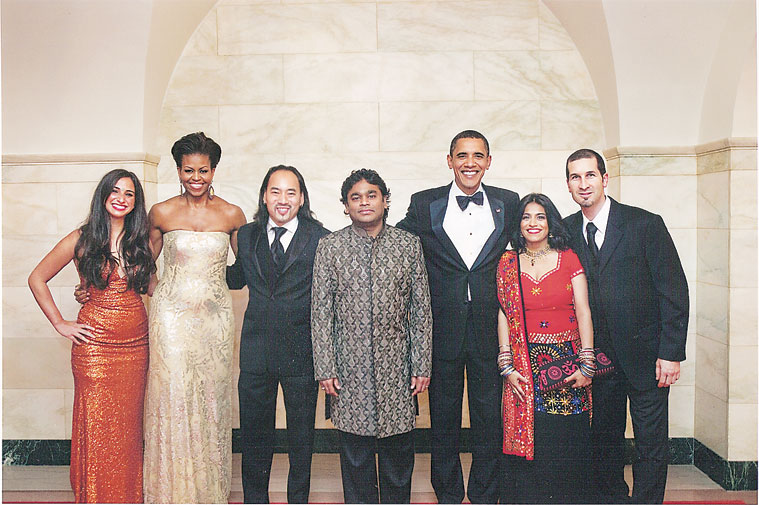 Building bridges with the East is high on the agenda of America and President Obama has gone all out to make his first state dinner a memorable one. The all-star lineup for at the White House included the Oscar-winning Tamil superstar musician A.R. Rahman as a headliner.

AR Rahman who uttered the words “Ella pugazhum iraivanukke” (All glory to God alone), to the amazement and thrill of Tamils all over the world who has already shared a table with First Lady, Michelle Obama, at the TIME magazine Top 100 world influencer list, has now had an opportunity to perform at the most famous home in the world, The White House, in Washington DC.

Mrs Obama shares her enthusiasm for the entertainment which graced the special night: “So who do we have tonight? We’ve got someone you guys probably know a lot about: Oscar winner Jennifer Hudson is going to sing tonight – yay! But also have A.R. Rahman. He’s also an Oscar winner and he helped create some of the music for the film “Slumdog Millionaire.” I don’t know if you guys got to see that movie – incredible movie. We’re also going to have Grammy-nominated jazz vocalist Kurt Elling, who’s a Chicago hometown guy and we’re pleased to have him. And we’re also going to have the National Symphony Orchestra under the direction of Marvin Hamlisch, who’s one of the greatest composers in this country.”

Also conveyed by Michelle is President Obama’s strong and well known respect for India: “Back when the President was a senator, he kept a picture of Mahatma Gandhi, the father of India, in his office. And it was before he was a senator, he was always a big supporter and admirer of Gandhi, because Gandhi inspired so many people – in India and all around the world — with his example of dignity and tolerance and peace. And with a simple call, Gandhi would say: To be the change we wish to see in the world – we are that change. We are that change.”

The dinner for Indian Prime Minister Manmohan Singh was held in a marquee on the White House South Lawn. High profile  guests dined at tables for 10 with apple-green linens. Deep purple flowers (the colour of the rare lotus flowers, that Thamarai is named after, which happens to be India’s national flower), are meant to evoke the state bird of India, the beautiful peacock.