Hosted by the Indian Restaurants Association of Singapore, “The Little India Seafood Mela” ran from the 30th June to 30th July 2012. Part of the annual Singapore Food Festival which started in 1994, the event at Little India has now established itself as an attraction for Singaporean citizens and tourists alike. This year’s festival highlights the importance of Seafood in Singaporean diet and cuisine. 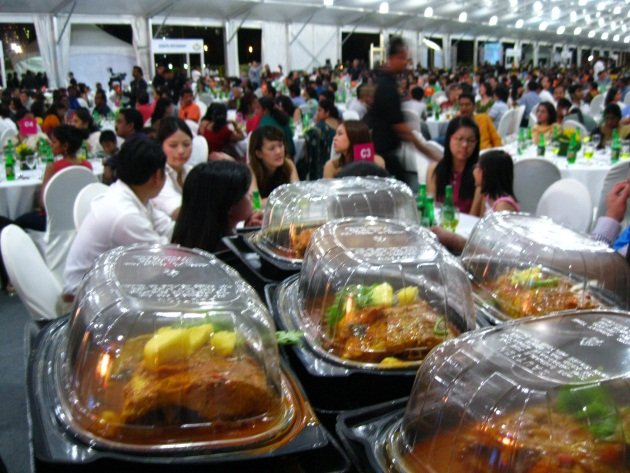 On the 14th July, the festival organisers broke a new Guinness World Record for the most number of fish heads served in one location. They serving 2,012 fish heads curries to 2012 paying guests. The curry was cooked by chefs from restaurants located in Little India – The Banana Leaf Apolo, Sakunthala’s Food Palace, Gayatri, Muthu’s Curry and Anjappar Authentic Chettinad Restaurant. Diners were entertained by multicultural and multinational performances during the evening event with a special performance by local comedian Kumar.

Every year the organisers, the Restaurants Association of Singapore attempt to create and break a new world record. Last year they set up the longest dining table, which measured 120m with diners served sumptuous north and south Indian food.

A fishing trawler was constructed for the Seafood Mela which was located in the heart of Little India. the trawler housed the Spice village featuring twelve South & North Indian restaurants for a month. Running alongside this was a heritage exhibition on the Indian Spice trade and Little India in Singapore. The entire food festival boasts an impressive agenda proving to be fun, informative and an adventure of gastronomic proportions.