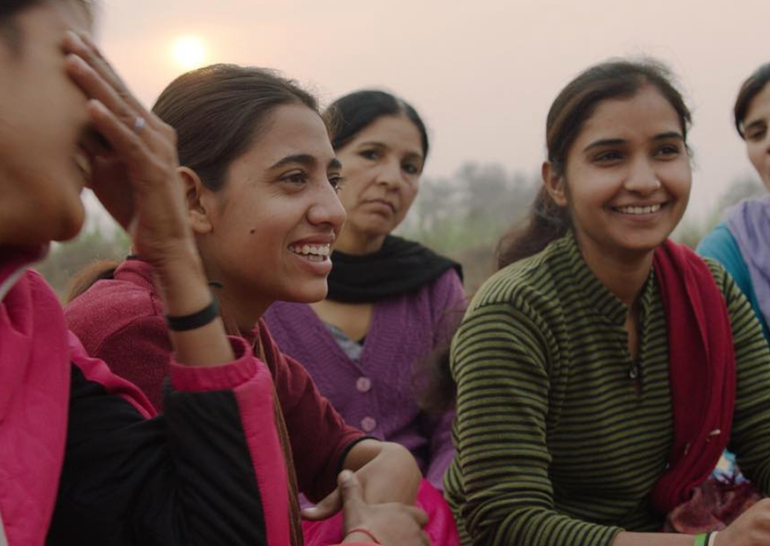 In 2006, a Tamil Nadu engineer named Arunachalam Muruganatham won a national award for designing what’s known as “the pad machine,” which a few people can manually operate, and using sustainable products, create pads. The low-cost sanitary pad-making machine has been installed in 23 of the 29 states of India.

In 2014, he was featured in Time magazine’s list of 100 Most influential People in the World.

When Oakland High School English professor Melissa Berton and her then-student Helen Yenser found out about this while attending a U.N. conference, they decided they had to do something.

“It is such a taboo topic, and in the United States as well,” Melissa Berton, producer and English teacher told TODAY.

The two and a group of other high school students formed The Pad Project, partnering with an nonprofit organization called, Action India. Through bake sales, Kickstarter and “yogathons,” they raised enough money to purchase a pad machine and produce a documentary.

Available on Netflix and directed by Rayka Zehtabchi, “Period. End of Sentence” won Best Short Documentary at the 2019 Oscars. The film focuses on a group of Indian women who fight the stigma surrounding menstruation and begin manufacturing sanitary pads.

For generations, these women didn’t have access to pads, which lead to health problems and girls missing school or dropping out entirely. But when a sanitary pad machine is installed in the village, the women learn to manufacture and market their own pads, empowering the women of their community. They name their brand “FLY,” because they want women “to soar.”

In India, 28% of girls have said they don’t attend school while on their periods because they don’t have access to affordable menstrual products. In the country, menstruation is sometimes considered dirty or unnatural. As a result of lack of access to menstrual products, one study found that women resort to using wadded up cloths, newspapers, dried leaves, and even ash to catch their menstrual blood.