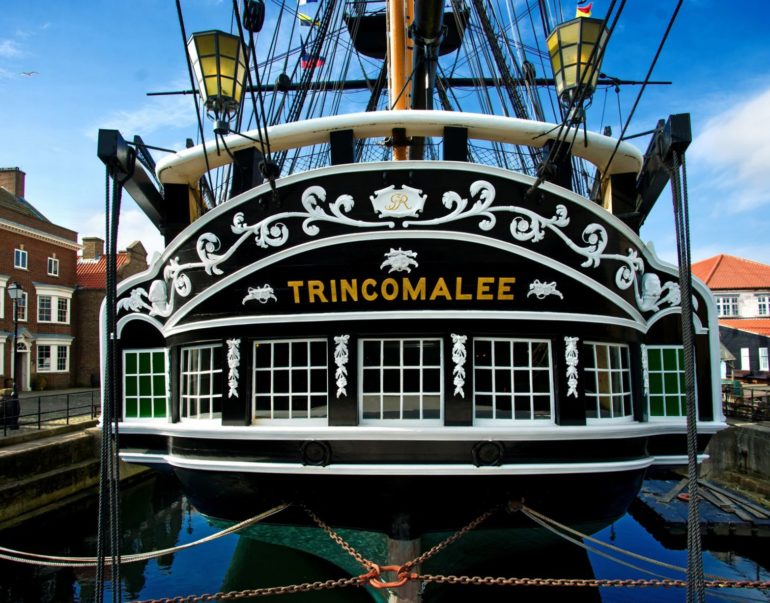 Built in 1817, Hartlepool is home to a remnant of Britain’s colonial history in the Indian Ocean. The HMS Trincomalee is the oldest British warship afloat and the last of Admiral Lord Nelson’s frigates.

She was named after the Battle of Trincomalee, which was fought between the British & French off the coast in 1782. Famous for its natural deep-water harbour, pristine beaches and the Koneswaran Hindu temple, Trincomalee lies in the north-east of Sri Lanka.

As the oak forests of England were straining under the demands of the war against Napoleon and centuries of shipbuilding might, the HMS Trincomalee was one of twelve ships to be built in the British colony of Bombay, which had easy access to the vast forests of Malabar Teak.

Launched on the 12th October 1817, HMS Trincomalee and the other newly built ships set sail to Portsmouth after a stopover at her namesake port. There she embarked guns, ammunition and stores for the long voyage ahead, including personnel for repatriation to the UK from the British Squadron based there.

During her time serving the Royal Navy she saw duties across North America, from Alaska to the west-Indies. She was to help quell riots in Haiti and stop a threatened invasion of Cuba, and serve on anti-slavery patrol.

HMS Trincomalee served for nearly 80 years before acting as a training ship for seafarers for a further nine decades as the Foudroyant before finally retiring in 1986. She was restored and renamed back to Trincomalee in 1992.