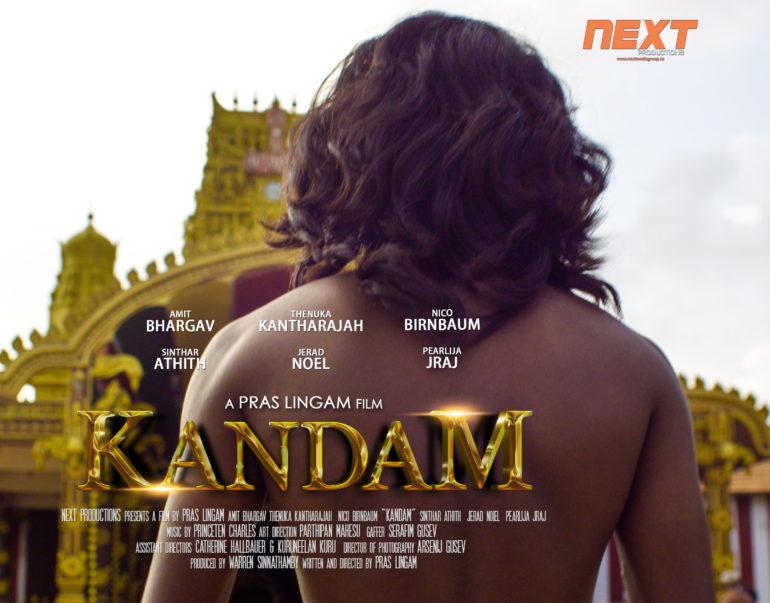 Kandam is a science-fiction thriller by Canadian Tamil film director Pras Lingam. Based on the premise of the existence of the continent of Kumari Kandam and the prevalence of Tamil civilization in antediluvian times, Kandam is set to premiere in various cities across Europe this December followed by a Asia wide premiere in January. The Toronto premiere is scheduled for March 2017.

A story by Pras Lingam

An unsuspecting fisherman, a genetics scientist and a medical professor find themselves on the threshold of a millennia of mystery. The surfacing of human remains that had been buried deep in the ocean for centuries, sparks the interest of researchers. On being stonewalled by his company in Berlin, Dr. Ashok Balan, decides to plunge ahead on his own and travel to Jaffna to study more about it. Maithili Sritharan, a medical professor based in Jaffna, aids him in his research. Their subsequent cloning intimidates the scientific society and thrusts them into a race for life.

Amit Bhargav the lead actor in ‘Kalyanam Mudhal Kadhal Varei’, the hit show on Vijay TV, essays the role of Dr. Ashok Balan. The much acclaimed actor, Thenuka Kantharajah, portrays Prof. Maithili Sritharan with ease and panache. They are ably supported by Sinthar Athith, NicoBirnbaum, Jerad Noel, Sivakanthan Sathasivam, Pearlija Jraj, Frank Walkhoff, and others. The film is directed by Pras Lingam, and the cinematography is handled by the Berlin based Arsenij Gusev.

The picturesque Jaffna, and the vibrant Berlin serve as perfect backdrops for this film, with some scenes being set in the serene Venice. This Tamil-English-French tri-lingual film is a seamless amalgamation of science, action, fiction, mythology and history.

Produced by Next productions, viewers will be given the opportunity to watch their other production “Broken Dreams” at the same screening.