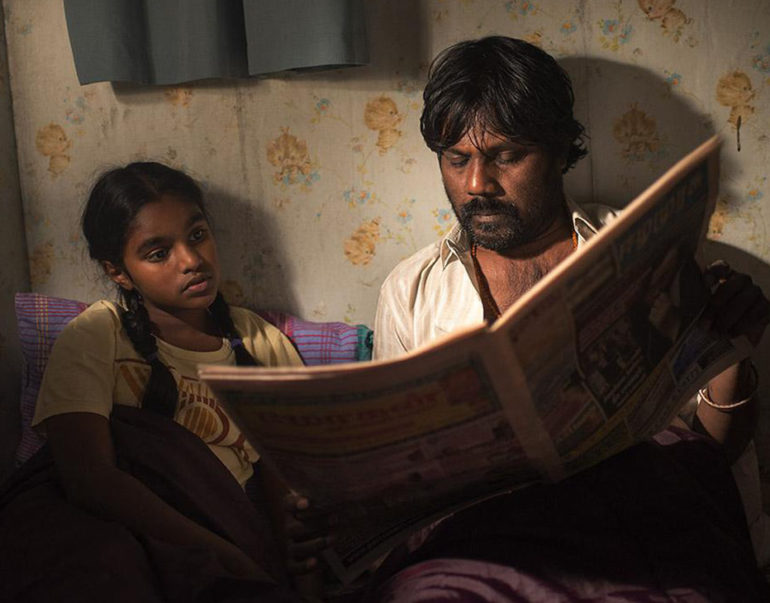 The stunning Palme d’Or winning film DHEEPAN will be releasing in UK cinemas on 8th April 2016. From Jacques Audiard and Thomas Bidegain; the director and screenwriter team behind outstanding BAFTA winners Un Prophet and Rust & Bone, DHEEPAN is a topical, brutal and powerful portrayal of three ‪‎Tamil‬ immigrants who illegally enter France in hope of leading a better life.

To escape the civil war in Sri Lanka, a former soldier (played by Antonythasan Jesuthasan), a young woman (Kalieaswari Srinivasan) and a little girl (Claudine Vinasithamby) pose as a family. They end up settling in a housing project outside Paris. They barely know one another, but try to build a life together. However, hurdles await them in the Paris suburbs, not least deciding what kind of relationship they want to have. This dilemma is intensified by the hard-knock struggle of holding down gruelling jobs on the dilapidated estate they call home, maintaining a stable domestic life, and looking after a ‘daughter’ (Claudine Vinasithamby) who belongs to neither of them. The trio’s predicament reaches boiling point when they trigger the unwelcome attention of the estate’s gang members, bringing their previously low-key existences to an abrupt end.

The toast of Cannes 2015, DHEEPAN will be opening in cinemas across the UK from 8th April 2016