Thousands of people gathered on the grounds of Vels University in Chennai, India to celebrate Puthandu – the Tamil New Year – in record-breaking style. 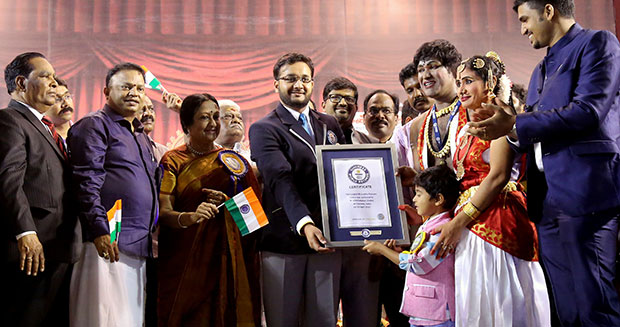 N. Athistabalan spent a year organising a Guinness World Records title attempt at the Largest Bharatha Natyam dance, and his efforts certainly paid off as a record 4,525 participants turned up and achieved a new record on the day.

Bharathanatyam is a classical Indian dance form originating from Tamil Nadu and dating as far back as 2000 B.C. Dressed in the customary red and white clothing, the huge mass of people fluently performed the traditional dance routine for 26 minutes, which they had spent months learning.

Before this, the largest Bharatha Natyam dance involved 2,100 participants and was achieved by Tapasyasiddhi Kala Academy at Shahu Stadium, Kolhapur, India, on 10 January 2015.

The event’s chief organiser N. Athistabalan is hugely passionate about raising awareness about the ancient dance of Tamilnadu and Tirukural. He said, “This record feat helps to take the old classical dance of Tamil worldwide.”