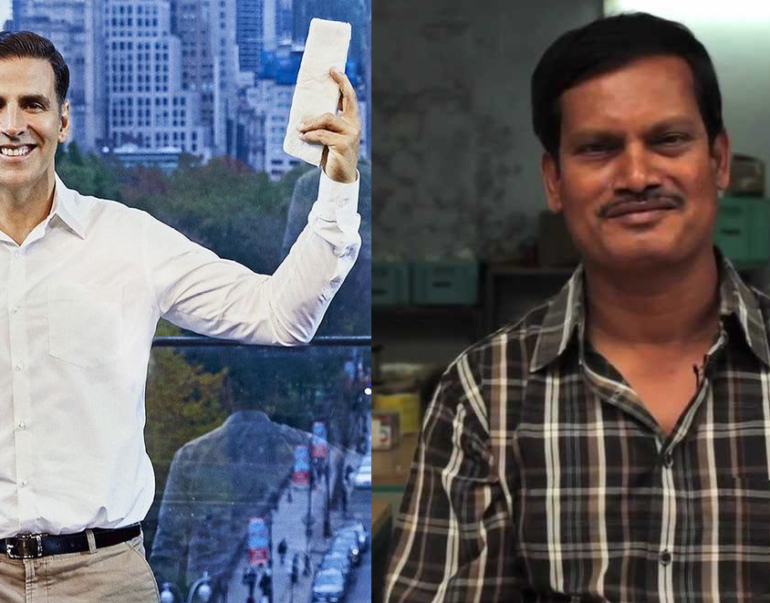 Is Padman based on the achievements of Arunachalam Muruganantham from Coimbatore in Tamil Nadu? A social entrepreneur who went to extraordinary lengths to invent low-cost sanitary napkins for women in rural India?

It seems that the life of Arunachalam has been romanticised & immortalised in the upcoming Bollywood film “Padman” by Tamil Nadu born Bollywood director R. Balki. However after viewing the recently released trailer you would probably question this.

Bollywood producers were quick (quicker than their South Indian / Kollywood counterparts) to move on the great story, which is actually based on Twinkle Khanna’s book, The Legend Of Lakshmi Prasad.

A collection of four stories on feminism: “The Legend of Lakshmi Prasad”, “Salam, Noni Appa”, “If the Weather Permits”, and the fourth – “The Sanitary Man of Sacred Land” which was “inspired” from the life and antics of Arunachalam.

Almost one third of the book is dedicated to the fourth story which is anything but fictional. It generously draws from the real life of Arunachalam Muruganathan, the social entrepreneur who was the sombre crusader of women’s independence and hygiene and made the world’s first low-cost sanitary pad making machine. That his inspiring journey of perseverance needs to be retold is well understood but it doesn’t bode well with the collection’s core theme of fiction. Times of India

The film is out in January 2018, with popular Bollywood actor Akshay Kumar playing the lead role. If that wasn’t disappointing enough, the film is not even set in Coimbatore where Arunachalam was born and the original story unfolds!

Acknowledging Bollywood’s phenomenal reach across North India and its diaspora, should the producers do more to credit the real inspiration behind the story? The social entrepreneur from a village in Tamil Nadu, whose invention now saves lives and benefits millions of women across Asia?

Who is the real Padman?