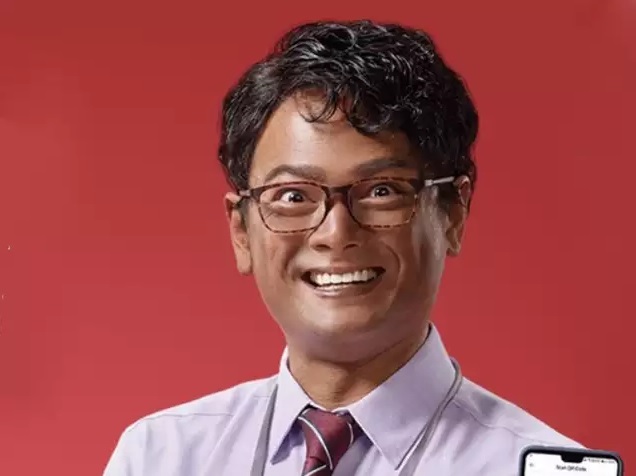 It’s 2019 and in some progressive parts of the world, diversity is embraced. Unfortunately, it seems as though Singapore & Malaysia haven’t received the memo, especially those who work within the advertising world!

Some call it racism, apologists will call it ignorance. Whatever you choose to call it, it’s clear to see that the darker you are, the more prone you will be to some form of discrimination! Here are three examples that have come to light via social media this week alone!

1) Colourism – prejudice or discrimination against individuals with a dark skin tone, typically among people of the same ethnic or racial group

To bring some context, Malaysia has over 2 million Indians, of which 90% are of South Indian heritage (the majority of these are Tamil speakers). In Malaysia, the term “Indian” includes all communities with ancestral ties to the Indian subcontinent – India, Sri Lanka, Pakistan, Bangladesh & Nepal.

Shambavi Shankar’s recent post about an employment ad she had seen in the store window of a Malaysian clothing company, brings to light how retailers, especially those with several branches should have a clear recruitment & communication policy! One that is inclusive of Malaysia’s diverse social fabric, and is easily understood by all, right through to the staff on the shop floor! Here is Sambavi’s recent encounter. 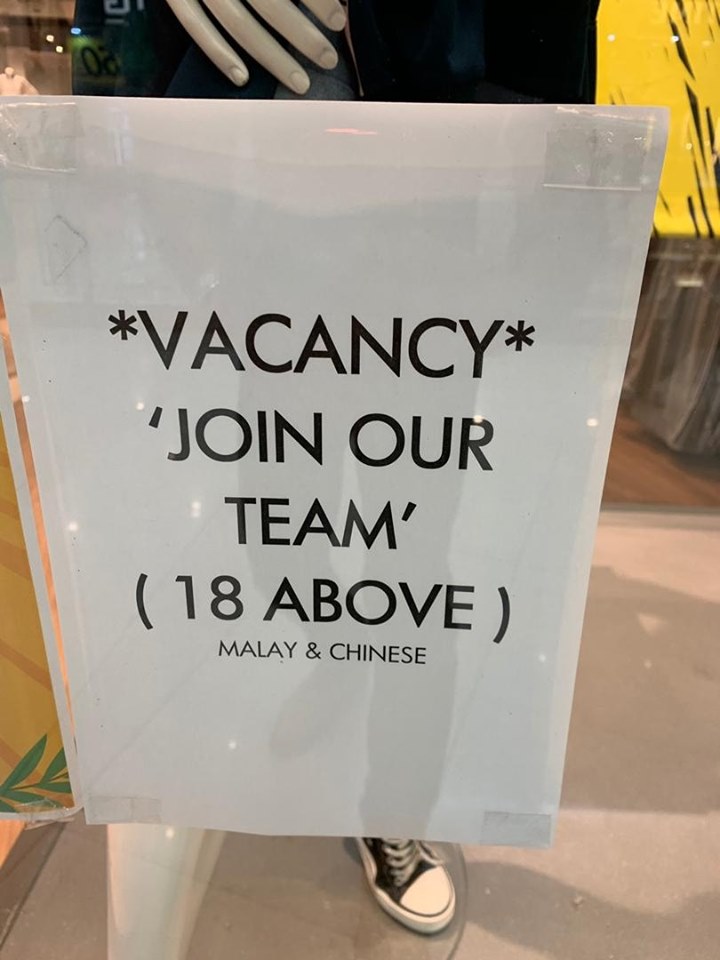 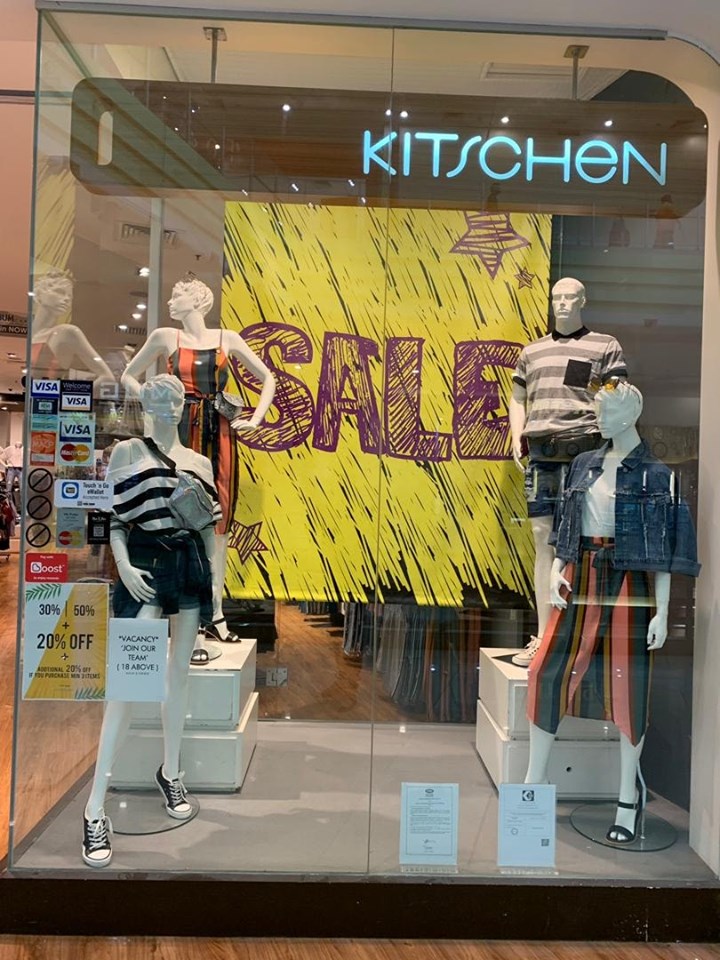 Dear @kitschen,
I hope there is a sound explanation for this.
Being a regular customer, I confronted the staff and asked her about the notice, to which she replied, “Isn’t it better to inform the indians on a notice outside rather than wasting their time, walking inside and applying.”

Kitschen were quick to issue an apology via their social media.

The last one on our list is just as disturbing as the previous three but has managed to get a lot of media attention.

Singapore is a multiracial society, its population is more than 75% Chinese, 15% Malay and 7% ethnic Indian (Majority Tamils).

On July 28th, an advertisement campaign for a government drive to promote Electronic payments (Epay), featuring Mediacorp actor Dennis Chew, was called out for being racially insensitive. The ad was labelled “brownface” and condemned by many Singaporeans. 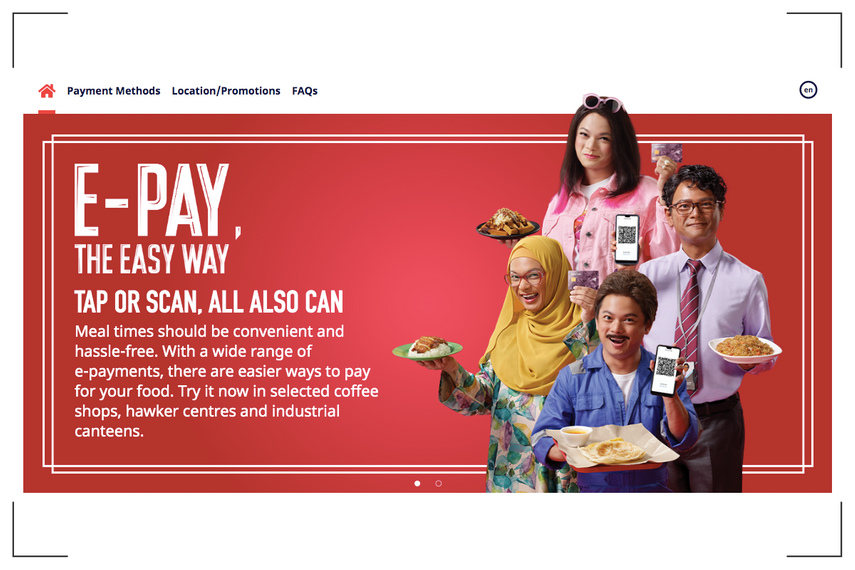 In this case, Dennis Chew, a Singaporean Chinese, used face makeup to darken his skin to portray a Malay woman & an Indian (Tamil) man – K. Muthusamy.

The question many are asking is why talents of respective ethnicities where not hired to play the characters. Instead Dennis Chew was hired to portray four characters: A Malay woman wearing a tudung, an Indian man in office wear, a Chinese woman in a pink Jacket and a man with a moustache and blue overalls.

Preeti Nair, a popular youtuber, and her brother Subhas Nair went as far as producing an online rap video titled “K.Muthusamy” condemning the ad campaign and racial stereotypes faced by the Indian communities in Singapore. 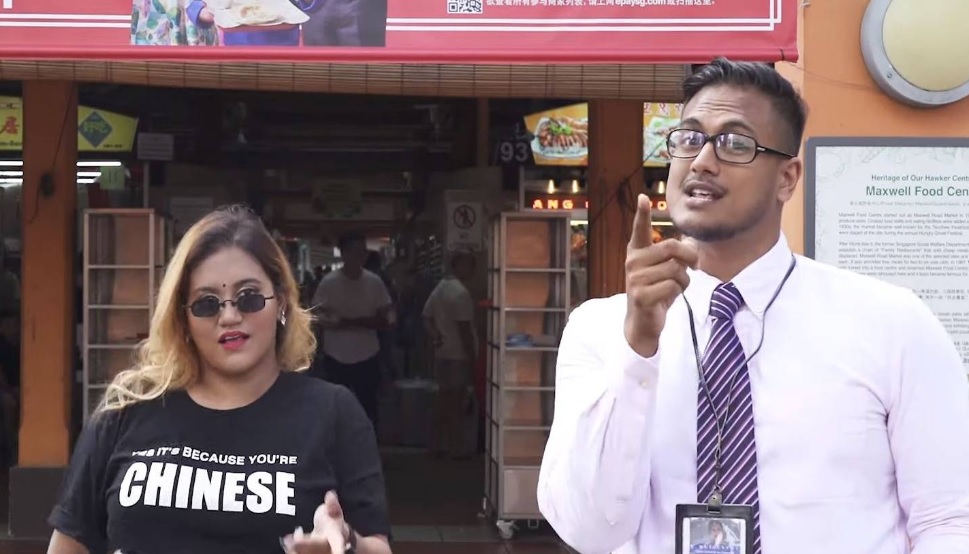 The message behind this advertising campaign is that e-payment is for everyone. For that reason, Dennis Chew, well-known for his ability to portray multiple characters in a single production in a light-hearted way, was selected as the face of the campaign. He appears as characters from different walks of life in Singapore, bringing home the point that everyone can e-pay. We’re sorry for any hurt that was unintentionally caused. Behind the ad is an initiative to provide greater convenience to consumers, merchants and small food businesses.

Failing to acknowledge the use of brownface and the repercussions of it, Ruby Thiagarajan, editor-in-chief of a Singapore cultural magazine posted her outrage on twitter.

The creative agency who made the ad just ”apologised” .. I don’t get the sense that they understand what they’re apologising for though. This is them justifying what they did + “sorry for unintentionally hurting you”. No mention of brownface or why it’s wrong!

Unfortunately for siblings Preeti & Subhas Nair things were heating up! A police report was lodged against K. Muthusamy’s “offensive content” and after an investigation, the Singaporean authorities summoned the creators to remove the video and issue an apology. 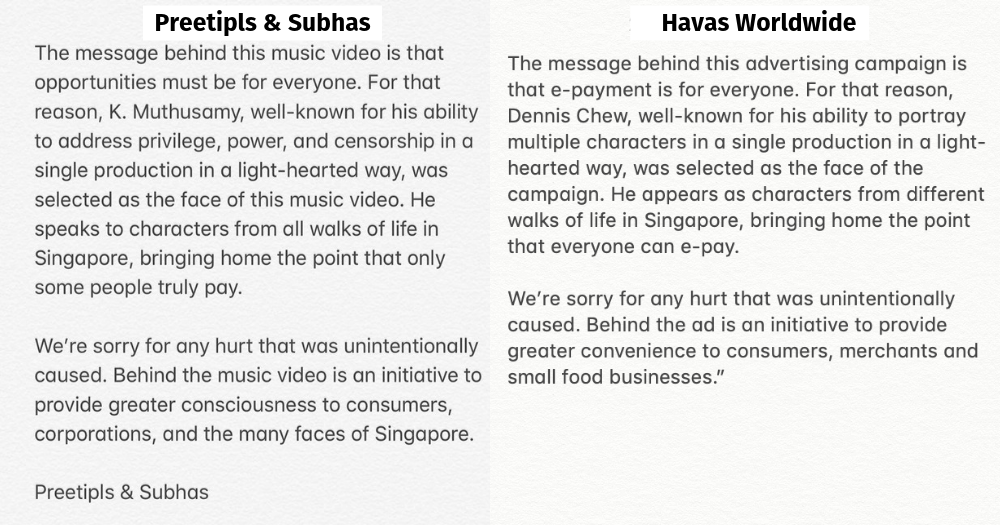 It’s a shame; I hope you know how many people are rallying behind you. Thank you for being a rock in this shitstorm.

So insincere! As a Chinese, I felt deeply hurt and insulted by your video! What have I done to deserve such vulgar language from you?

Home Affairs Minister K Shanmugam, who throughout the incident was seen relaying his government’s strong stand, said on Sunday, “Racism exists in Singapore, but the situation is “much better than before” and improving over the years.”

“We want to build a cohesive society, but racism corrodes and deepens the fault lines in society,”