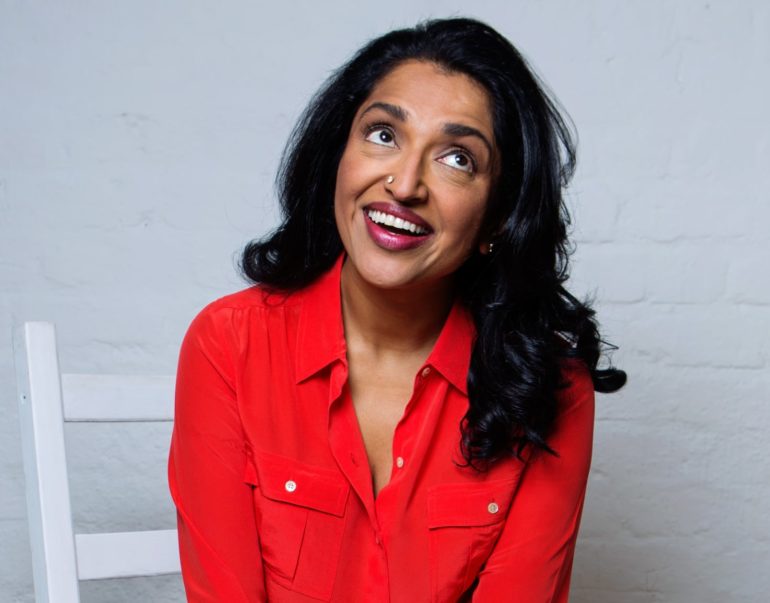 Following in the footsteps of Romesh Ranganathan, Aziz Ansari & Mindy Kaling, three prominent Tamils who have broken through into the mainstream comedy scene, is London based new-comer Sindhu Vee.

City banker turned stand-up comedienne Sindhu Venkatanarayanan is embarking on her solo UK tour titled Sandhog, where she will perform at 39 shows across the length and breadth of the United Kingdom from the 5th September till the 22nd November 2019.

Check out this hilarious clip taken from her performance at the Apollo, where she compares British & Indian parenting methods. The BBC Comedy clip went viral and amassed over 29 million views across facebook!

British and Indian parenting could NOT be more different! @SindhuVFunny #LiveAtTheApollopic.twitter.com/5sRMf8re3g

Sindhu’s father is Tamil and her mother is from Uttar Pradesh. Born in India, Sindhu has lived in Delhi, Lucknow & the Philippines. The mother of three has studied at the universities of Delhi, Oxford, Mc Gill (Montreal) and Chicago where she met her Danish husband who she has been married to for twenty years. She credits her parents and her own parenting experiences for being a great source of material for her routine.

In 2016 Sindhu was nominated for the BBC New Comedy Award and in 2018 her solo show Sandhog debuted to critical acclaim at the Edinburgh Fringe Festival, the world’s largest arts festival.

For a full listing of her 2019 show dates, please visit www.sindhuvee.com