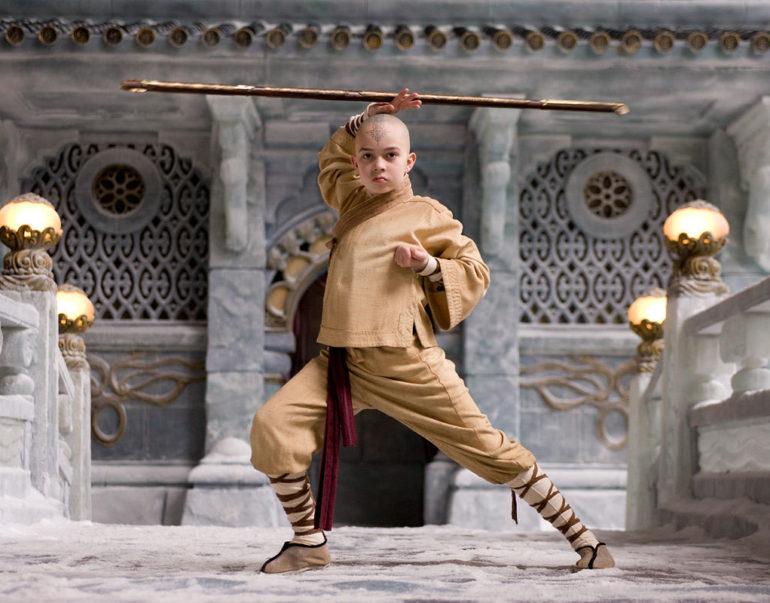 Born in beautiful Pondicherry, South India, the ½ Tamil and ½ Malayali son of 2 eminent Doctors, Manoj Night Shyamalan, is back with his much anticipated film, ‘The Last Airbender’. Growing up in an affluent neighbourhood of Philadelphia, his passion for films were apparent at an early age. His Dad gave him a Super 8 camera and by his teenage years, he had made 45 films back then, influenced by the work of Steven Spielberg.

He studied at the famous Tisch School of the Arts, in New York and his first film was called Praying with Anger, a semi-autobiographical outing, which got a screening at the Toronto International Film Festival. It was filmed in Chennai and Manoj, who has a habit of making appearances in his movies, starred in it. He then made Wide Awake, with the financial support of his Parents, and got it a limited release. He also co-wrote the screenplay for the cute animated tale of Stuart Little.

It was his film The Sixth Sense, with Bruce Willis, which got him immense acclaim – it was a box-office smash hit the world over and got nominated for 3 Oscars. Thus began Shyamalan’s reign with Hollywood – he then made Unbreakable (Samuel L. Jackson, Bruce Willis), Signs (Mel Gibson), The village (Joaquin Phoenix, Sigourney Weaver), Lady in the water (which was a flop) and The Happening (Mark Wahlberg). Known for his ability to give a major twist in his movies, he has had hits and misses in his career.

This brings us to the present day, where Sci-Fi fans and kids await this 3D film, based on the Nickelodeon TV series, Avatar: The Last Airbender. Shyamalan shares how his daughters got him intrigued in this fantasy world inspired by the Far East: “Watching Avatar has become a family event in my house. Once I saw the amazing world that Mike and Bryan created, I knew it would make a great feature film.”

The film is out in July in the US and will reach the rest of the world in the Summer months. Featuring the likes of British talent Dev Patel (Slumdog Millionaire, Skins) as Zoko, comedian Aasif Mandvi (Spider-Man 2) as Admiral Zhao and the role of the child avatar who brings balance to the world, goes to Noah Ringer, who plays Aang. Jackson Rathbone from the Twilight films will play the part of Sokka, and Nicola Peltz will play Katara. The story is a coming  of age tale, about a young reticent hero, who reluctantly wields the job of playing ‘Avatar’. It is a classic tale of good and evil, where the ‘bendable’ elements are controlled skilfully and thus kept in balance to ring world harmony.

Filming took place in Greenland and Reading, Pennsylvania and the interiors in Philadelphia. Shyamalan will direct the trilogy, which will be more serious than it’s light-hearted cartoon version. We share with you the incredible trailer from this film, as a first look and wish Shyamalan and his team much success.